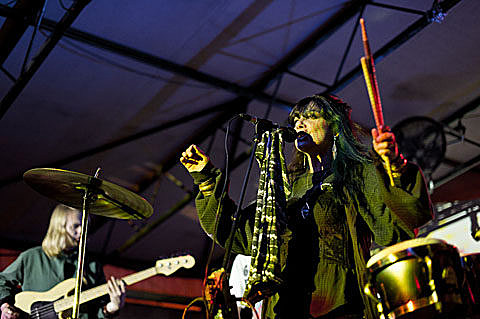 Gang Gang Dance have a few dates scheduled for this summer including Prospect Park on July 18 opening for Hot Chip. That show has since sold out, but if you weren't able to get tickets, we're giving away a pair. Details on how to enter to win are below. Tickets are still available for Hot Chip's Terminal 5 show (7/20) with Chromatics.

UPDATE: The ticket contest is for Hot Chip's Terminal 5 show with Chromatics, not Prospect Park. Details below.

Other currently scheduled GGD dates include Hudson, NY's Basilica Music Festival with Liturgy, Mick Barr, Prince Rama, and more, and POP Montreal. The NYC band have also announced another hometown show which happens on September 21 at Public Assembly with fellow psych weirdos Sun Araw. Tickets for that show are on sale now.

Speaking of Sun Araw, when main man Cameron Stallones isn't off recording records with reggae legends, he's also been working on his own new material. That material will see the light of day sometime this year in the form of The Inner Treaty LP. Stay tuned for more info on that.

Lists of dates and contest details below...

--
For a chance at winning tickets to Hot Chip and Chromatics at Terminal 5k: either tweet something that includes both @BrooklynVegan AND "Hot Chip at Terminal 5" in the tweet, or send an email to BVCONTESTS@HOTMAIL.COM with the subject line "Hot Chip". Include your first and last name in the email. We'll pick a winner at random and contact them with more details. If you enter by email, it will not be shared with anyone else. Good luck!
--