Prince Rama at Austin's Mohawk in 2011 (more by Tim Griffin) 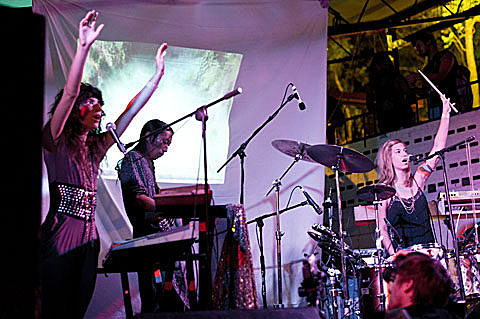 We just mentioned that Gang Gang Dance are playing a Bandshell-presented show at Public Assembly on September 21 with Sun Araw, and we've realized that they also play another Bandshell-presented show the next day at Cameo Gallery on September 22 with Prince Rama. Tickets for the Cameo show are on sale now, and like the Public Assembly show, they cost $27.

Gang Gang and Prince Rama are both playing Hudson, NY's Basilica Music Festival in August. Since we last spoke, more details for that "festival" have been announced. Pitchfork (who are co-presenting the festival) reports:

In addition to previously announced acts Liturgy, Gang Gang Dance, Prince Rama, Mick Barr, and others, we're happy to add more components to the weekend: Blazer, a New Mexico-based sound system owned and operated by Excepter's Nathan Corbin and specializing in heavy dub, roots, ragga and dancehall, will be featured on Saturday afternoon. "Neidan!" will also feature performances from the Psychic Paramount, Hiro Kone, and Mike Fellows (aka Miighty Flashlight, ex-Rites of Spring). We're also introducing an early-evening sunset cruise on the Hudson on Saturday.

Updated GGD dates are listed below...