Gang Gang Dance in Austin in 2011 (more by Tim Griffin) 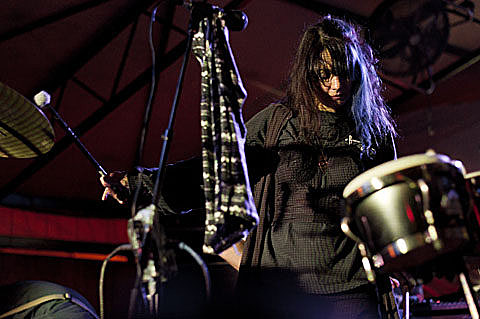 As mentioned several times, Gang Gang Dance will open Hot Chip's sold out Prospect Park show tonight (7/18) (if you're going, wear a poncho!). We also recently mentioned that GGD play a $27 show at Public Assembly on September 21 with Sun Araw, and soon after, mentioned they play another small show at the same price at Cameo Gallery on September 22. We've since discovered the band will play a THIRD Brooklyn show that week. This one's a bit bigger (and thus, a bit cheaper) (UPDATE: all three shows are $20 now) and it happens on September 23 at 285 Kent. $20 tickets for that show are on sale now. Prince Rama were originally set to open the Cameo show, but they will now instead open the 285 Kent show, and New Moods will open the Cameo show. Tickets for the Public Assembly show and the Cameo show are still available. Updated GGD dates are listed below.

Speaking of Hot Chip, after tonight's show, there will be a free afterparty at Santos Party House where they will DJ, along with a DJ set by Gang Gang Dance's Brian Degraw. The party starts at 11 PM. Maybe you just want to come early and catch JEFF the Brotherhood for free?

Hot Chip also play Terminal 5 on Friday (7/20) with Chromatics. Tickets for that show are still available.

A list of all Gang Gang Dance tour dates is below...