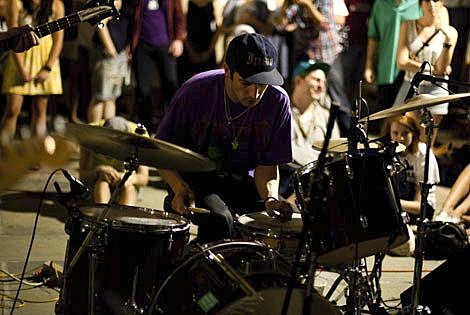 "On Saturday night at Pukkelpop as the festival was coming to a close Jesse [Lee, drummer for Gang Gang Dance,] was singled out and attacked by three security guards as he was attempting to walk to the artist backstage area to get the shuttle to the hotel. Security denied him access although he was clearly wearing an artists wristband and immediately dragged him to a darkened area that was not on the close circuit TV network and forced him face first into the ground, they then pulled his arms behind stamping on them trying to break both arms whilst repeatedly shouting at him, 'We are going to show you what real pain is.' They handcuffed him and continued the unprovoked beating. The three thugs then took Jesse to the police where they accused him of throwing a bottle at them." [GGD's publicist via Pitchfork]

The rest of the publicist's statement is below....

"Jesse was drinking from a plastic cup, as you have to decant any drinks on entrance to the main arena. I was with him only moments before the attack so can confirm this. I went to the toilet which is why I was not with him at the time of attack unfortunately.

Jesse was happy to be taken to the police for his own safety and was driven to the station where he was told not to make a scene or a formal complaint. He spent 45 minutes with the police, who gave him a lift back to the hotel.

Jesse sustained injuries to the head, a large bump and bruising, and multiple bruising to the body. This made it painful and difficult to play the following days show. He was badly shaken up and it marred what was a wonderful performance and day for the band. Up until that point we were all saying how brilliant the festival was."

That sucks, and they need to stay out of Europe!