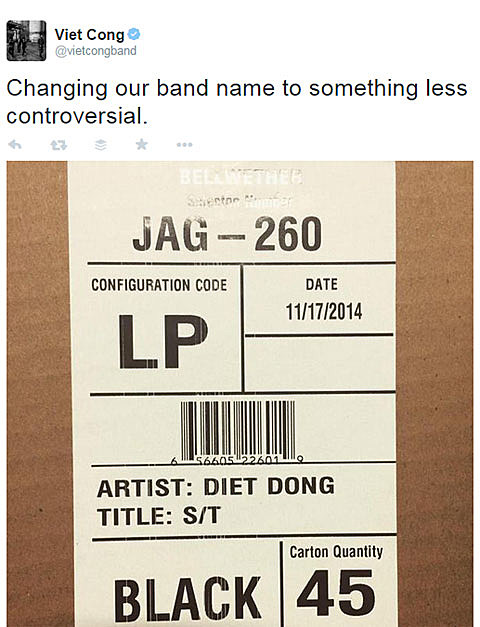 One of 2015's fastest rising indie bands, Viet Cong, has been the subject of many articles lately, not because of their music, but because of their controversial name. Though maybe not immediately obvious to most young Americans, "Viet Cong" is a loaded term. Sang Nguyen at Impose wrote:

This history of violence is what I am reminded of every time I see Viet Cong's band name pop up on my news feed, in the music media, and on festival line-ups. Comprised of two ex-members of the band Women (also a pretty contentious name considering none of the members were actually women), Viet Cong have released records on labels like Jagjaguwar, Mexican Summer, and Flemish Eye, while garnering critical acclaim from Stereogum, NPR and even Impose. Pitchfork, who in recent months have done a thorough job calling attention to instances of misogyny, racism, and cultural appropriation in popular music, gave the band's recent album "Best New Music" status and have them booked at both SXSW and their annual summer festival. [Impose]

The controversy has been known to the Canadian band for as long as they've been putting themselves out there. They've talked about it in interviews. Comments show up in forums and on social media, even by the band themselves (see above), but it all just really bubbled to the surface last week when Oberlin College cancelled a show. A statement from the college reads:

I am writing to officially announce the cancellation of the Viet Cong show at Oberlin College's Dionysus Discotheque (commonly known as The 'Sco) meant to take place on Saturday March 14th, 2015. This statement aims to express the reasoning behind such a move. As the person behind booking this band, I would first and foremost like to apologize on both my and my booking organization's behalf for inviting a band with a name that deeply offends and hurts Vietnamese and Vietnamese-American communities, both in Oberlin and beyond. I acknowledge the problematic nature of a band naming themselves "Viet Cong" and extend my apology to anyone hurt or made uncomfortable by the name and its connotations.

You can read the rest of that HERE.

Viet Cong is of course not the first band whose name has caused this kind of reaction. There are many examples including Joy Division (named after Nazi concentration camp brothels described in the novel House of Dolls) and New Order (perceived Nazi connotations). A more recent example is Muslims who changed their name to The Soft Pack. Another band who can definitely relate is Gang of Four, who also happen to be an active band right now too. In fact, the current lineup is on tour now and they play Irving Plaza in NYC TONIGHT (Saturday, 3/7 --- tickets still available). 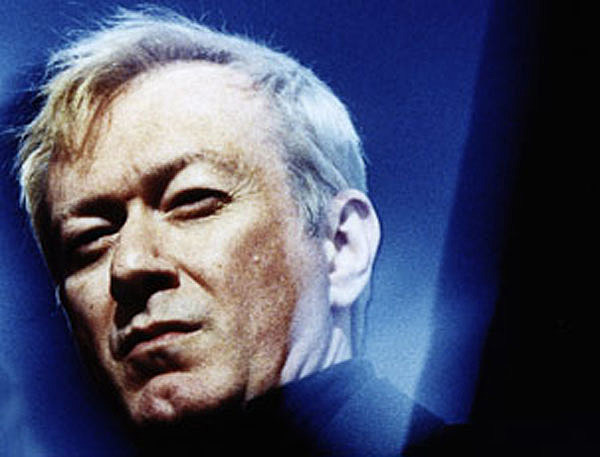 We caught up with Gang of Four original and current member Andy Gill and asked him what he thought about the Viet Cong situation. Here's what he told us:

ANDY GILL of GANG OF FOUR to BROOKLYNVEGAN:
it's a little ridiculous to ban bands for their name. We can all think of dozens of bands with really quite offensive names and as soon as you get into being the guardian of public morality, taking it upon yourself to decide whats ok and what is not, you are acting in an illiberal, undemocratic and anti-progressive way. People should be treated as grown ups, capable of making their own decisions . We should not be deciding for people what we think they are capable of understanding or not. Artists; film-makers, writers, musicians need to be un-censored so they can make their point, political or otherwise. - Andy

Catch Gang of Four on tour and at SXSW where Viet Cong is also playing before their own upcoming tour.