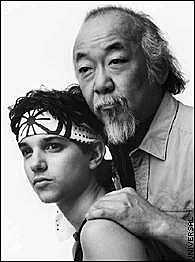 Stereogum brought up a good point: Gang of Four has a song on the Karate Kid soundtrack. As far as I can tell, Desire was never released anywhere else.

"Are the post-punk godfathers trying to cover up their participation in this great '80s movie's shitty soundtrack??? Do any of YOU have this tune???" [Stereogum]