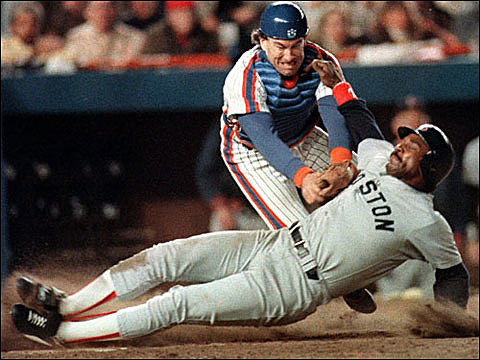 "In 1986, Carter's Mets won 108 games and took the National League East by 21.5 games over the Phillies. Carter suffered a postseason slump in the NLCS, batting .148. However, he hit a walk-off RBI single to win Game 5. Carter also had two hits in the next game which the Mets won in 16 innnings.

The Mets won the 1986 World Series in seven games over the Boston Red Sox. Carter batted .276 with nine RBIs in his first World Series, and hit two home runs over Fenway Park's Green Monster in Game Four. He is the only player to hit two home runs in All-Star Game (1981) and two home runs in a World Series game. Carter started a two-out rally in the tenth inning of Game Six, scoring the first of three Mets runs that inning on a single by Ray Knight. He also hit an eighth-inning sacrifice fly that tied the game. Carter finished third on the NL MVP ballot in 1986." [Wikipedia]