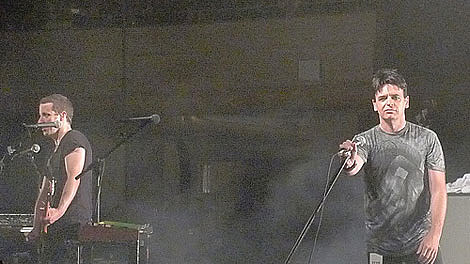 "It becomes plainly obvious what's happening. The crowd [at The Palladium] gets even wilder. By the time we get to the next song my thoughts have become primarily focused on when to breathe and when to shout out lyrics. You can't do both. There's no room to breath half the time either, as in half the time the people around me are pressed up against all sides of my body and they can't even expand. I'm drenched in mine and a dozens of other people's sweat. There are a couple of times where I decide that the lyric is more important than the breath, and in those times I also seriously believe it's possible I might die. Multiple times. One particular time I'm about to fall backwards (as far as I can fall, that is, not very far with all of the people behind me) and a man (In a radiohead shirt) puts his hands on my back and pushes me upward again.

Eventually, about halfway through [NIN playing The Downward Spiral for the second time on this 'final' tour], the crowd pushes me into an area of calm fist waving and body moving, with not harsh movements to fucking kill me. Still completely worth it. Hearing that ENTIRE album in that setting with everybody else screaming the lyrics at each other, amazing. They continue the set after they play the entire album, but after they finish the album I realize 'Holy shit ok that was mind shattering, but if I don't get liquid right now I'm going to die." So I squeeze out of the crowd and go back to get a coca cola, which the lovely lady gives me free of charge. Going back to the floor, I decided a nice spot at the back is just fine. Trent Reznor's special guest tonight was Gary Numan, who sang two songs that influenced NIN's sound when Reznor was just deciding how to go with the band, according to him. The songs were 'Metal' (which you probably haven't heard) and 'Cars' (which you HAVE heard and if you haven't I'm fining you ten internets) and both of them were fucking awesome." [A Short History of Nearly Nothing]

That review is of last night's Nine Inch Nails show at the Palladium in LA where Gary Numan took over Peter Murphy's job as Special Guest Legend, and where NIN performed TDS for the second time on the "Wave Goodbye" tour. They also did it at Webster Hall. Peter Murphy joined them at both Terminal 5 shows, and both shows in Chicago. The show before LA was in Canada. THE NEXT LA SHOW IS CANCELLED, and then there are two LA shows after that. Palladium setlist and videos below...