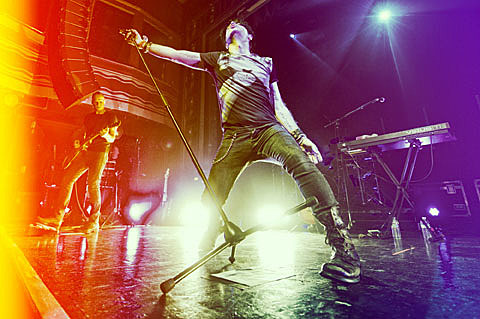 Synth pop pioneer Gary Numan's seventeenth album, Splinter (Songs from a Broken Mind), is out now (you can pick it up) and he's been on tour for a while supporting it. We just caught him in NYC after his first-ever appearance at SXSW.

One of the new album's songs, "I Am Dust," was just given video treatment with blurry, VHS-style images of Gary's head as he sings the song. It was directed by Logan Owlbeemoth with effects by Omebi Velouria, using a Tachyons+ video glitch synth to get its trippy results. The video makes its premiere in this post. Check it out, along with more info on its effects styles and the list of his remaining tour dates, below...

The Gary Numan 'I Am Dust' video was made using a Tachyons+ video glitch synth effected live via HI-8 camera and a CRT television captured by a modern digital camera. No computer post production was used in the making of this video.