The Gaslight Anthem at Lollapalooza - 8/5/12 (via Daniel Johnson) 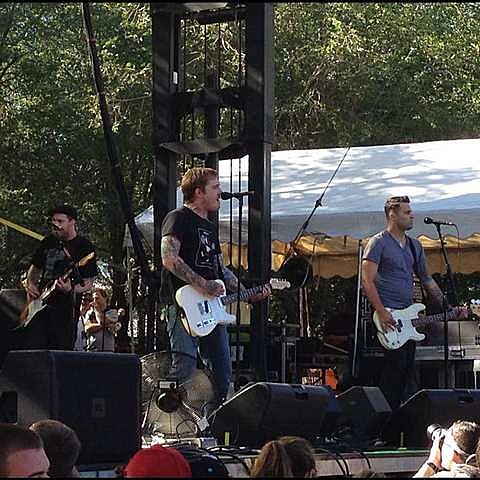 The Gaslight Anthem released their first major label album and fourth overall, Handwritten, late last month and have been touring profusely for it throughout the year. They've already hit NYC twice this year, with shows at Music Hall of Williamsburg and Webster Hall. Now they've got a ton of more international dates scheduled for late summer into fall, and they'll return to NYC on November 28 and 29 at Terminal 5. Tickets for both NYC shows go on sale Friday (8/10) at noon.

Handwritten has been receiving pretty mixed reactions. SPIN, Guardian and Pitchfork gave the album pretty mediocre to negative reviews, whereas the punk scene is loving it; Punknews and Altpress gave it near-perfect scores and Absolute Punk did give it a perfect score. It's not just the punks though, Stereogum awarded it 'album of the week' the same week that Passion Pit and Purity Ring's excellent albums were released. I think Handwritten is pretty great, and definitely the band's best since The '59 Sound. It doesn't quite reach the heights of that album, but opening track/lead single "45" is the most immediate single since "The '59 Sound," and if Handwritten is an example of what major label rock sounds like in 2012, I'm very okay with that. What do you think?

The Gaslight Anthem were just in Chicago for Lollapalooza over the weekend. They performed on Sunday (8/5), playing mostly off '59 Sound and Handwritten. If you haven't been keeping up with our Lollapalooza coverage, pics of day 1 are HERE and pics of day 2 are HERE. Pics of day 3 are coming soon.

You can check out a video of their entire Lollapalooza set, the setlist, and a list of all upcoming tour dates below.