All Points West on Sunday (by Chris La Putt) 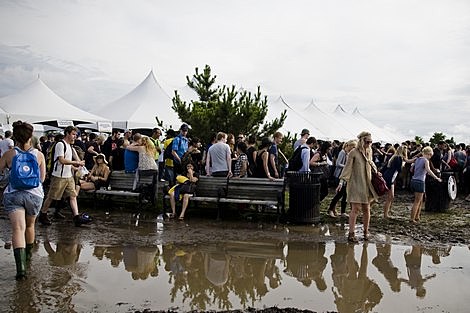 "Due to circumstances completely beyond our control, our set at All Points West on Sunday August 2nd was cut at the last minute. Needless to say, we were and still are extremely disappointed that we weren't allowed to perform for everyone who came out to see us, braving the terrible weather, the mud, the lightning and the extremely delayed door time...only to find out that we weren't apparently playing after all.

Should any of you who came to see us at APW want come to our just-announced October 15th show in NYC at Terminal 5, try to remember to bring your APW ticket stub with you. If you do, you can present it to the people doing "ID Checks" when you enter and they will give you a drink ticket good for a free beer, soft drink or water (whatever you prefer).

With this small gesture, we want to show all of you who were at APW Sunday how grateful we are that you made that effort....while we're extremely bummed that things turned out as they did, we're also humbled by the emails and messages we've gotten from so many of you, and by your support of us, even when days like Sunday happen. So thank you for hanging in there and we hope to see many of you in a much drier and happier setting on October 15th in the city." - The Gaslight Anthem

The Gaslight Anthem are going on a fall tour with Murder by Death and other openers which vary by date. Jesse Malin and Broadway Calls are the other bands on the NYC show which goes on AmEx presale Wednesday (8/5) at 11am, "Radio Presale" Thursday at 10, and then general sale Saturday (8/8) at noon. All dates below...