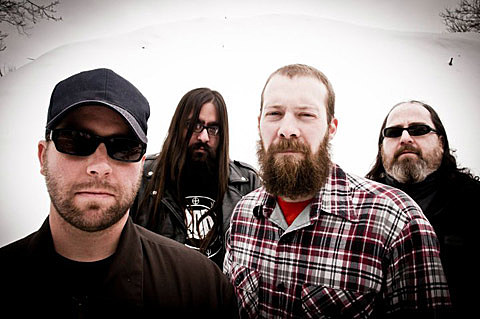 Everyone, I have some bad news: due to a serious illness in his family, Jason has had to go to Utah for a couple of weeks, and we have to drop off SHoD XI [Stoner Hands of Doom] and the Slow Southern Steel premiere in NYC. I hope that you all understand... it's not something that we wanted to do, frankly we'd hoped to start getting busy again... but family has to come first. - [Karl of The Gates of Slumber]

Quite the past few weeks for BrooklynVegan metal events, with Loss cancelling their appearance at Saint Vitus (and subsequently being replaced by Unearthly Trance) and now the cancellation of The Gates of Slumber. Luckily, we roll deep and The Gates of Slumber will be replaced by fellow Indiana doom breathren Apostle of Solitude!

Apostle of Solitude's last LP, Last Sunrise, saw release on Profound Lore Records last year, and the band recently released a pair of splits with Dawnrider, Rituals of the Oak, and The Flight of Sleipnir. For the unfamiliar, Check out some audio of the old-school doom band (featuring members of The Gates of Slumber) below.

As discussed, CT of Rwake will be in the house to present his film Slow Southern Steel, so expect this Arkansas madman to do some collaboratiing with either Cough, Apostle of Solitude or Earthling on stage. Doors are at 10PM, tickets are on sale (limited seats available), and there will be a bunch of free Jagermeister for all of you maniacs.

Cough, Apostle of Solitude and Earthling are all on board for Stoner Hands of Doom XI, an annual festival in Frederick MD. The show will feature numerous doom luminaries over its three days (August 12-14), including Earthride, Hour of 13 and Windhand among many others. Windhand is also scheduled to play Acheron on August 19th.

Check out some streaming audio, alongside the film trailer below... 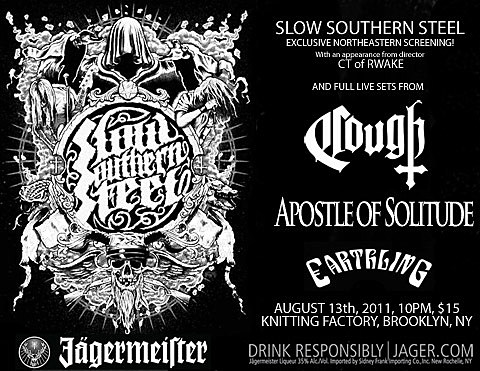