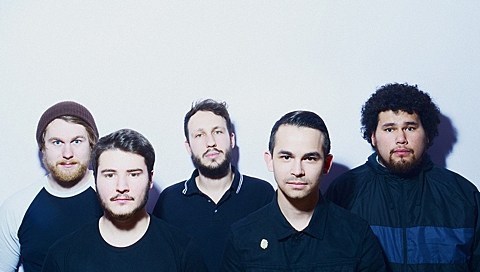 Bayonne, NJ's Gatherer surfaced a few years back with 2012's Postcards EP and 2013's debut LP, Caught Between a Rock and a Sad Place -- you can download both, name-your-price, at bandcamp -- which were both solid examples of the kind of Touche Amore/Defeater/etc style post-hardcore that's been taking off as of late. Not long after the album came out though, the band replaced their singer. New vocalist Rich Weinberger sings a little more and gives them a bit more of a melodic hardcore style, and they sound just as good doing this as their previous sound.

The band signed to Equal Vision, who will release their TBA sophomore album at some point this year, but ahead of that they've got a new single, "God Deluxe." Here's what they said about it:

This was one of the last songs we wrote for our upcoming full-length but ultimately we liked the idea of opening our record with this utterly filthy bass line," the band reveals. "Thematically, "God Deluxe" deals with consumerism and our constant need to industrialize at all costs. There's something terribly ugly with a culture that thrives on false needs many of which delude people to the point of detachment from one another. Who can build it higher? Who can wear it sexier? Whatever it is, we need it now and we will literally kill for it.

The song's video premieres in this post and can be watched below. You can pre-order the single on 7" vinyl here.

This month, Gatherer open for fellow NJ post-hardcore band Trophy Scars at their show at Maxwell's on March 21. Also on that bill are Long Faces and Arrows In Her. Tickets are still available.