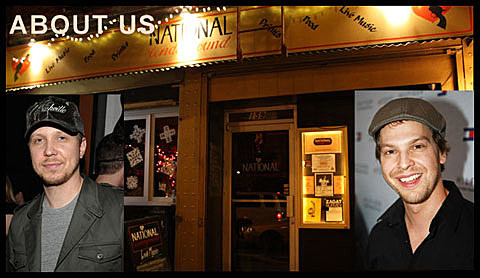 "Pop singer Gavin DeGraw was viciously beaten by a pack of thugs on the Lower East Side early yesterday -- and then hit by a taxi as he stumbled off, police sources said. The 34-year-old performer -- who has spent the summer opening for star rock bands Maroon 5 and Train -- had been drinking and just left a group of pals when he was attacked by the marauding goons sometime between 3:50 and 4:20 a.m. at Sixth Street and First Avenue, the sources said. His nose was broken and he suffered cuts to his face, they said. The creeps then fled, and the dazed singer, whose hit song "Chariot" went platinum, kept walking, sources said. [NY Post]

The Post article says "Lower East Side", but then it says 6th St & 1st Ave which is why I think it actually happened in the East Village, which it turns out is not that far from National Underground, the NYC club that Gavin co-owns with his brother Joey who is also a musician. That's both of them and the venue in the picture above.

Gavin (who I googled to figure who he was and realized he falls into the "music I don't like the most" category) is in stable condition (a good thing) and is supposed to open for (yikes) Maroon 5 and (yikes) Train at Jones Beach on 8/12.