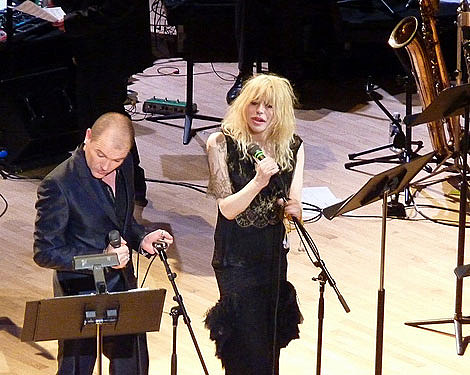 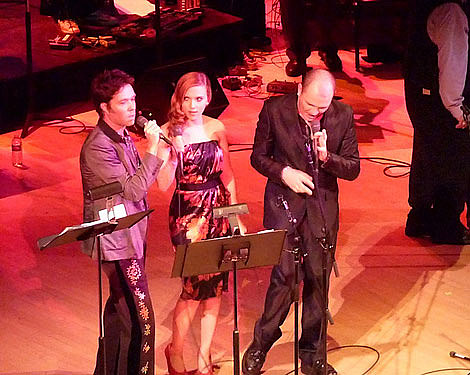 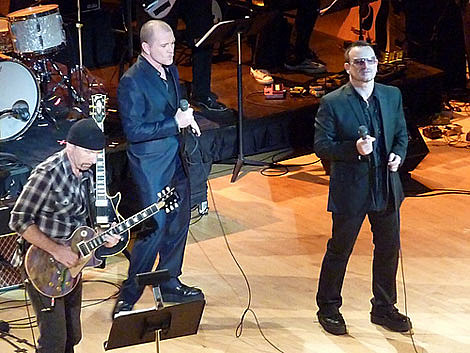 Sunday, October 4th was the "Hal Willner Presents: An Evening with Gavin Friday & Friends" show at Carnegie Hall. The whole night was a benefit for (RED), a charity directed toward AIDS in Africa.

Rufus Wainwright, Scarlett Johansson and Saturday Night Live's Fred Armisen joined Friday for the come-hither cartoon "Mr. Pussy," from Friday's 1995 album, Shag Tobacco. (Armisen came out dressed to the purple nines -- as Prince.) Friday and falsetto-soul singer Antony duetted on a pair of ballads, including a Memphis-brass-soaked reading of "He Got What He Wanted" from Friday's 1989 solo debut, Each Man Kills the Thing He Loves. Friday and Virgin Prunes devotee Courtney Love were just on the right side of out-of-control in a pounding version of Magazine's "The Light Pours Out of Me." Queen of the post-punk furies Lydia Lunch played the same half of the night as Lady Gaga (who came out in next to nothing -- she made Love look demure). And a metal-machine-noise assault by Laurie Anderson (violin), John Zorn (saxophone) and Lou Reed (guitar distortion) eventually resolved into the Velvet Underground's "Sweet Jane" with Friday, Bono and a cheerfully pickled Shane McGowan of the Pogues trading verses.

Bono was not just passing through between stadiums. He, the Edge, Adam Clayton and Larry Mullen Jr. were on and off stage half a dozen times; U2's Friday covers included "I Want to Live" (done with techno drive and Joshua Tree-like space) and the crusted-glam bomb "King of Trash." Bono also took a solo spot, turning on his Irish Sinatra for the Shag Tobacco elegy "The Last Song I'll Ever Sing." The Edge's brother, guitarist Richard Evans, joined Friday and singer Guggi in a mostly-intact Virgin Prunes reunion (the group broke up in 1987). Their overlapping vocal harangue in "Sweethome Under White Clouds," with JG Thirwell of Foetus guesting as a third voice, sounded like the Beastie Boys at the End of Days. [Rolling Stone]

A list of all the songs U2 members played on, more reviews and videos from the show, including the "Jean Genie" encore, below...

"When Spinner spoke to Friday last week, he discounted the possibility of a Prunes reunion, saying, "I don't believe in going back." Apparently, taking the Carnegie Hall stage changed that. After a sweetly nervous intro by Love, who recalled seeing the Prunes in their heyday and how they had "so much sex, snarl, and raw power" that she had her "ass handed to [her] that night by the Prunes," Friday and his former bandmate Guggi joined guest JG Thirwell to display all of those attributes with a sultry 'Caucasian Walk' that turned Carnegie Hall into a gilded CBGB's." [Spinner]