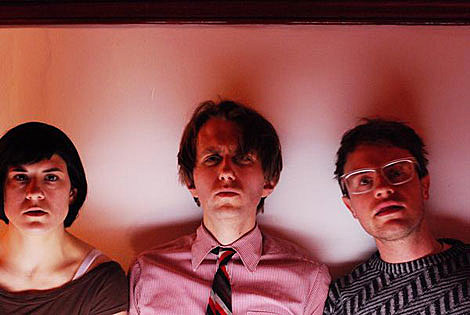 In their disheveled attic studio, the members of Gay Beast don't talk mathematics. Early on, they don't talk much at all. Today, singer and keyboardist Dan Luedtke is busy screen-printing the inserts for the vinyl version of the band's latest spazz-rock collection, Second Wave. The process, it seems, is nearly as painstaking as creating an actual Gay Beast tune, minus the eyeballs-on-fire jitters their adrenal scores provoke...

City Pages: How did you become involved with your label, Skin Graft?

Luedtke: Our friends in AIDS Wolf are on the label. We were looking for a label, putting together demo packages, trying to do it differently this time, trying to be more proactive. They were going to sign two bands for '09. The label owner lives in Vienna, so there was a bit of a courting period, talking to each other on the phone.

Luedtke: Second Wave relates to second-wave feminism, and the songs include portraits of different feminists. Before this record, we did a split 7-inch about Donna Harroway. There's a song about Andrea Dworkin. For me there's an interest because I feel it intersects with queer politics a lot. We can look at what feminists worked on as a way to talk about personal politics and strategies for changing things. There is a lot of interest with the second-wave feminist era because there was a lot of idea creation happening. Modern, radical ideas, some of which were far-fetched and impractical. People wanted something so badly they'd make up new means for accomplishing it.

The noisy Minneapolis band kicks off a three night stay in in NYC, tonight (6/3), with a show at the Silent Barn featuring Satanized, Joe Lentini and Hot Guts. They'll be at Bruar Falls June 4th with Talk Normal and Body Type[s], and at the Market Hotel on June 5th with Titan, Child Abuse, NYMPH and Liturgy.

Gay Beast's Second Wave LP came out a few weeks ago, at the end of May on Skin Graft Records. Check them out for yourself. There's a video of Gay Beast at NYC's Cake Shop in 2006, with all tour dates, below...