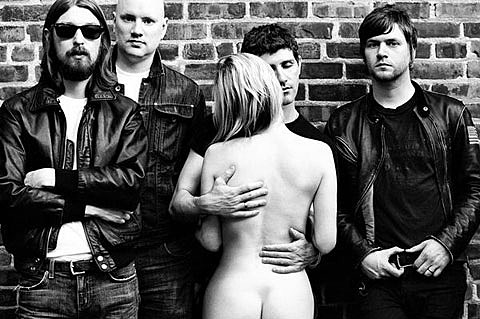 It's a hard road to tread when press refers to you as "the band that taste forgot", but depending on what you're going for, that could be a complement (and in this case, I think it is). Bringing to mind the post-hardcore nuttiness associated with bands like Refused, The Blood Brothers and Daughters (RIP?), Brooklyn wildmen Gay For Johnny Depp are prepping to release a new six track EP entitled Sex Vid Singles Club. The band, which features members of Mind Over Matter and Errortype 11 in their ranks, will release the EP on October 12 via Shinebox Recordings (A new label). The EP will serve as a primer for the band's full length which is due in February 2011. Dig on "Suckcess" above and a video for literally every other song below.

GFJD currently has one date on its calendar,10/21 at Matchless Death by Audio with Strife, Cruel Hand, Batillus (who just played Cake Shop), and Primitive Weapons (lineup seems to be up in the air) as part of CMJ (it's the Shinebox Recordings showcase).

The show is part of a short east coast tour one of two in NYC that the ex-straight-edge kingpins Strife are scheduled to play that week, They also play Mercury Lounge on 10/20 as part of the Converse-presented "True Til Def" show with the decidedly non-straight-edge crew of Priestess, Earthless, Disembodied, Iron Age, and Naam. Smoke 'em if you got 'em and head to the site to RSVP to the free CMJ show.

Tracklisting and tons of videos are below....

Gay For Johnny Depp - Shh, Put The Shiv To My Throat

Gay For Johnny Depp 'You Have A Theory, I Have A Gun'

Gay For Johnny Depp 'Belief In God Is So Adorable'

Gay For Johnny Depp 'She Said, "I like this one"'

GAY FOR JOHNNY DEPP's Sex Vid Singles Club TRACKLISTING:
1.) Suckcess
2.) Hey Fucked Up! (Punk Rock Can't Exist in Countries with Good Social Services)
3.) Shh, Put the Shiv to My Throat
4.) You Have a Theory, I Have a Gun
5.) Belief in God is So Adorable
6.) She Said, "I Like This One"