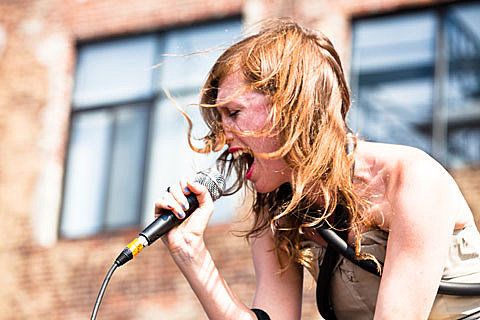 Glasser isn't just on tour opening for Gayngs, she's playing as part of the band too. And that band is currently working its way across America for its first live shows out of Minneapolis. That's the same tour that was supposed to hit Webster Hall on October 3rd, but that show has been moved to the more intimate Bowery Ballroom. "All tickets honored" and there are even more tickets on sale for that show, and for the one happening the next day at Music Hall too.

It was also announced that the band will stop in for a TV appearance on on Late Night With Jimmy Fallon while they're here (on October 4th too). All dates, a video of Glasser playing on MPLS.TV with Gayngs, and a video of Gayngs covering The Alan Parsons Project's "Eye in the Sky", below...

City of Music: Gayngs from MPLS.TV on Vimeo.

GAYNGS - Eye in the Sky from GAYNGS on Vimeo.