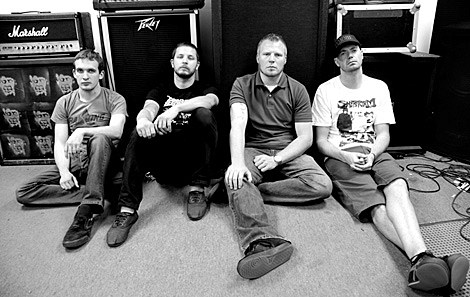 Gaza do not hail from that contested strip in the Middle East, but much like its indigenous people, they are waging a holy war... AGAINST religion. It's a long hard campaign, especially in Utah (the band's home) where the population skews 78% Christian, but Gaza began the fight in 2004 with the East EP, followed by 2006's criminally underrated I Don't Care Where I Go When I Die. Combining Botch-y math, grindcore, Holy Terror aesthetics, and even a little Portal-like darkness, it's hard to argue that this band is fucking EVIL.

Now comes word that Gaza is on the verge of unleashing He Is Never Coming Back, a NEW LP for Black Market Activities (Guy from The Red Chord's label). Due on 11/10, the LP was produced by Andy Patterson (Bluetip, Shelter, State Of The Nation) and features 14 tracks, one of which is the gnashing, antisocial beast "Windowless House" which is available for download above. It's a must.

So far Gaza has only a pair of dates on their calendar, joining up with Baroness and Earthless in Denver and SLC (dates below). Watch out for these guys when they come to your town, not only at the nearest stage but lurking around a dimly lit corner with a rusty knife in hand.

Speaking of Portal, we recently debuted a new track from the band in The Week In Metal.

Look out for my interview with Dave Witte coming TODAY, just in time for the BV and 1000 Knives Presents Burnt By The Sun show at Cake Shop!

Cake Shop isn't the only BV sponsored heavy show this weekend either... make sure and get out to Woe / Aluk Todolo / Malkuth / Castevet at Union Pool on SUNDAY (10/4). You can win tickets!

Full tour dates, the album tracklisting, and videos of their incendiary performance at Dudefest 2009 (where a pit started on stage) are available below...