Greg Fox behind the kit with White Hills (more by BBG) 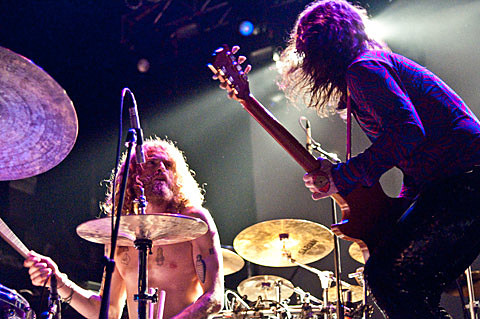 As discussed, Greg Fox of Liturgy is GDFX, and as just mentioned, his new LP One Thing is out NOW via Impose on blue vinyl. While the LP is definitely heavy on Fox's weapon of choice (drums) at times, it isn't in many of the ways you would expect. The new LP touches on stuttering samples, glitch, uber compressed snares, 8-bit and even some drone over the course of its 40 minutes, all of which you can exclusively stream below.

If you missed GDFX at Shea Stadium last night (8/25), well, he plays two more shows tonight (8/26). One of them is back at Shea Stadium with Woodsman (their second of two NYC shows this week). The other is with Amen Dunes at Saint Vitus.

If you miss the St Vitus show, Amen Dunes will also play a show at the soon-to-be-closed Live With Animals in Brooklyn on 9/24 with with K-Holes, CAVE, and PC Worship.

Before then PC Worship will do some touring with Greg's band Liturgy in September. That's before Liturgy play a string of dates with Boris that brings Liturgy to Irving Plaza on October 27.

Greg also plays in/as Guardian Alien. A record release show for that project happens at at Shea Stadium on 9/23.

Greg has filled in on drums for White Hills, and that band (sans Greg) will play a free show as part of the Rock Yard series.

Album stream & all tour dates for GDFX, Liturgy and PC Worship are below.