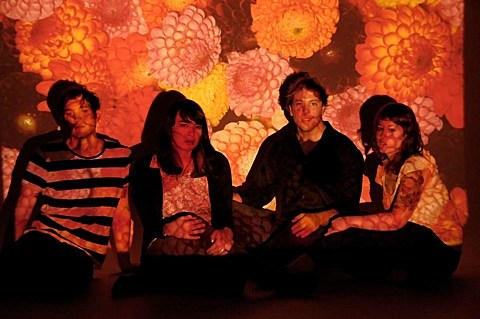 Portland psychedelic rockers Genders (featuring former members of the now-defunct Youth) have released released an EP and a 7" since forming last year, and "Something To Get You By," the first single off their upcoming debut LP, Get Lost (due out in early December), might be their most engaging song to date. They have a surfy indie pop vibe on a lot of the earlier tracks, but this one is dark, atmospheric, and grounded by a driving rhythm section. The guitars crescendo in a shoegaze/post-rock kind of way, and the vocals may be melancholic and covered in reverb, but it's still catchy stuff. Check it out below.

Genders recently wrapped up some dates supporting Built to Spill, and they'll team back up with them later this month, but before that they're doing some headlining dates of their own. They don't open Built to Spill's NYC show (11/7 at Irving Plaza), but they do play three of their own NYC shows this week.

TONIGHT (11/3) they're at Death by Audio with Ovary Action and Crazy Pills. Then they play Shea Stadium on Monday (11/4) with The Veda Rays, Gondola, and Honduras. And finally, they'll be at Arlene's Grocery on Tuesday (11/5) with The Attic Ends, Black Wing Halo, and Cash Money & the Sellouts. Tickets for the Arlene's Grocery show are on sale now. No advance tickets for the DbA and Shea shows.

All dates are listed (some venues still missing), along with the song stream, below...

Genders - "Something To Get You By"

# with Built to Spill