Ween at Summerstage in 2010 (more by Andrew St. Clair) 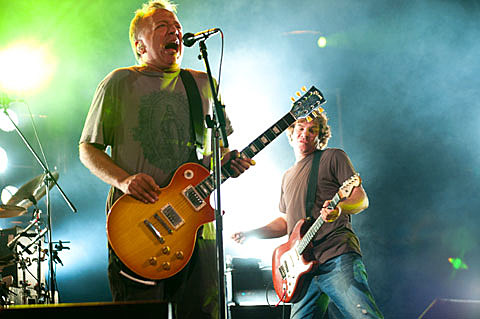 "It's time to move on," Freeman told Rolling Stone from his home in New Jersey. "I'm retiring Gene Ween."

So does that mean the end for Ween, the band that Freeman formed with high school friend Mickey Melchiondo (a.k.a. Dean Ween) in New Hope, Pennsylvania, in the mid-Eighties?

Freeman, who released his solo debut Marvelous Clouds earlier this month, says there's no animosity towards his bandmates or Melchiondo, who he met in the eighth grade. He says the pair are still on speaking terms, even though he's been contemplating the decision for the past eight years.

"For me it's a closed book. In life sometimes, in the universe, you have to close some doors to have others open," says Freeman. "There's no, 'Goddamn that such and such!' For me, I'd like to think it's a door I can close finally." [Rolling Stone]

Is this really the end for Ween? (And the end for the oneness they had between God and Satan?) Aaron Freeman seems to mostly entirely suggest so in this Rolling Stone interview. The AV Club, however, reports that Dean Ween (aka Mickey Melchiondo) expressed surprise on his (private) Facebook page saying it "is news to me, all I can say for now I guess."

Ween haven't released an album in fiver years and, even if this isn't an official breakup, it doesn't seem like there'll be another any time soon. Freeman recently released Marvelous Clouds, an album of Rod McKuen covers that is worth checking out.