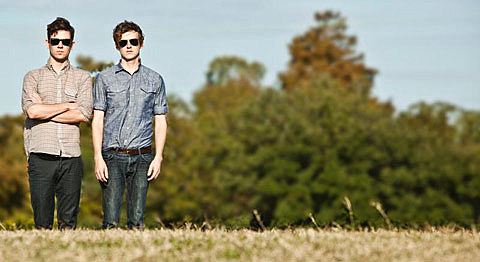 I take you away from trying to figure out the identity of The Modern Weepers (my favorite comment guess: Hard-Fi) to talk about shows happening this weekend. As always, this being New York City, there's lots of great options.

Dale Earnhardt Jr. Jr. are in town this week with Generationals and the two bands play tonight (5/11) at Mercury Lounge (sold out!) and tomorrow (5/12)  at The Rock Shop (not sold out!). Dale Jr Jr also play Kidrockers on Sunday [5/14] at the Rock Shop with Pearl and the Beard.

I feel like there's been enough talk about Dale, whose dreamy brand of synth rock can be heard on their pretty good upcoming album It's a Corporate World which is out June 7. So I'm here to talk about Generationals who are surely one of the few indiepop bands in New Orleans. Unlike Big Freedia, they haven't appeared yet on an episode of Treme but their new album Actor-Caster is loaded with clever, tunefull pop. What they do isn't particularly cool at this second in time, but I think stuff like this is never really out of style. You can download the title track to last year's great Trust EP at the top of this post and there's a widget below that will get you two tracks from Actor-Caster for the price of your email. 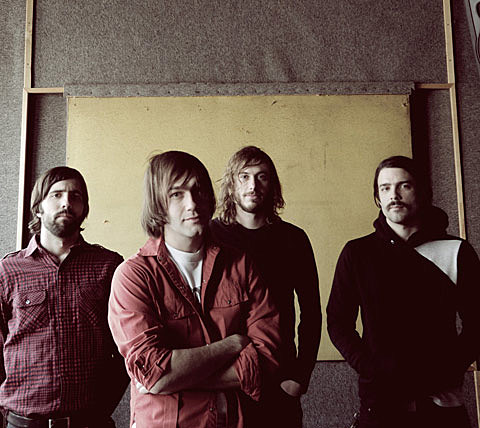 Also here this week for a couple shows are Montreal's Malajube , playing The Rock Shop tonight (5/11) and will be at Bowery Ballroom on Friday (3/13) with the epic and amazing Besnard Lakes (and Nova Scotia's Wintersleep).  If you were in Austin for SXSW this year, you may have seen Malajube at our SXSW day party this year we co-presented with M for Montreal who we are co-presenting a show with this Friday in Brighton (if anyone is headed to the Great Escape).

Like a lot of folks, Malajube made a big impression on me in 2006 with their record Trompe-L'Oeil and, even more, their string of fantastic CMJ performances that year. The tunes were catchy, they were great live, the language barrier didn't matter so much. I must admit 2009's Labarinthes didn't make much of an impression but I've really been enjoying the band's brand new album La Cavern. The album is out now in Canada and will be available in the U.S. sometime soon on MB3 Records. Maybe they'll have it at the merch tables this week.

The new album walks the line between guitar pop and space rock and I keep imagining them performing songs like the vaguely disco "Le Blizzard" on the Muppet Show. There's a general soft filter '70s vibe to the whole of La Cavern that feels very comforting. You can listen to the whole thing via a streaming widget doohickey at the bottom of this post.

And go see the Besnard Lakes, for whom I have declared my love for many, many times. And go early for Malajube. 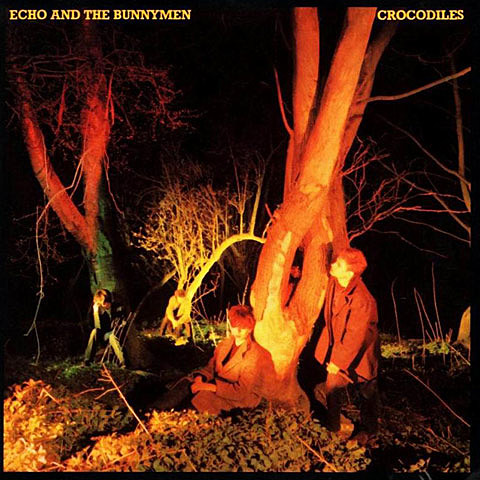 Echo & the Bunnymen are at Irving Plaza on Friday (5/13) and Saturday (5/15) playing their first two albums -- 1979's Crocodiles and 1980's Heaven Up Here -- back to back, in their entirety. This may not be quite as exciting as seeing them at Radio City doing Ocean Rain with a full orchestra, but it's still pretty awesome.

Especially because the albums are post-punk classics. Crocodiles is all scratchy nervous energy and contains no mediocre songs whatsover. I could list them all if you wanted, each one amazing. The whole thing still sounds fantastic. Heaven Up Here is considerably darker, more paranoid but no less definitive. "Over the Wall" is one of their best-ever songs. These two records are also a great showcase for Will Seargent's guitar-playing that still sounds innovative today. I'm a little sceptical of Mac's ability to belt out these songs -- it's gonna be a workout on his pipes -- but the chance to hear deep cuts like "All That Jazz," "It Was a Pleasure," "Happy Death Men," and "With a Hip" is exciting.

Opening for both shows is Bunnymen megafan Kelley Stoltz, who has covered Crocodiles in its entirety, both on record and as an infrequent but incredible tribute act that also featured Spiral Stairs of Pavement and Shayde Sartin who's now in The Fresh & Onlys. (They played CMJ 2003 at Arlene's Grocery, it was awesome.) Anyway, Stoltz is now an established artist in his own right, putting out terrific records on Sub Pop when not playing drums in Sonny & the Sunsets.  So if you're going to this show, do go early. 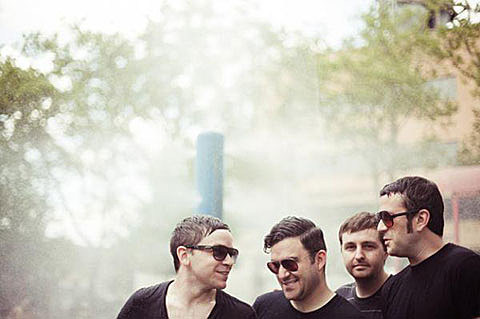 We now enter the local band portion of This Week in Indie. Let's start with L Magazine 8 Bands runners-up Gross Relations who are playing three times this week: tonight (5/11) at Don Pedro with Raccoon Fighter and The Horehounds, then tomorrow (5/12) at Bruar Falls with deVries and Hunktronic, and on Friday (5/13) at Cake Shop with The Bynars, Field Mouse and Infinity Hotel.

The band have been releasing a series of digital singles via their bandcamp page, all of which exemplify their brand of supercatchy, keyboard-friendly indie rock. You can download the A-sides of the last two at the top of this post. "Blame the Records" is especially good. As I said previously, those keyboard lead lines make for easy comparisons to the Rentals which I'm gonna guess is probably what they were going for. Which is fine -- the hooks are undeniable. 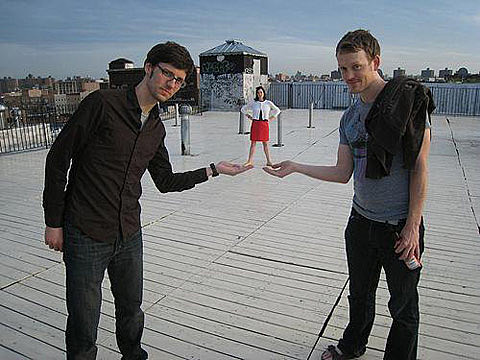 Radical Dads, meanwhile, were actually picked by the L Mag as one of those 8 Bands You Need To Hear and I certainly agree. And hear them you can Thursday at Cake Shop. The band's debut album, Mega Rama, is out next month and it's pretty damn good. I hear a lot of '90s DC  here -- more Simple Machines and DeSoto than Teenbeat -- whether that was intentional or not. Which means, basically, strident, melodic indie rock. The record is also a contender for my favorite album art of the year, done by Michael Deforge, which you can see below. Also below is yet another widget, this one will allow you to stream or download Mega Rama track "New Age Dinosaur." Oh, and they are quite good live.

Also playing that Cake Shop show tomorrow are Shark? whose debut album True Waste comes out May 24. The band worked with former Pere Ubu bassist Tony Maimone on the record and what I've heard sounds really good. You can download two tracks from the album up top, and Shark?'s Pixies-ish theme song is pretty fun. 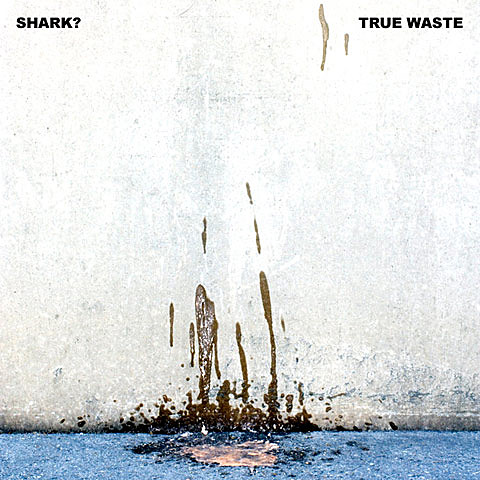 And lastly, I'd like to write a little about Vacation who are opening for Oberhofer at Coco 66 on Saturday night (5/14). The band are pretty new. What started as a solo project for Paul Greenfield Daly, formed into a band during one of the blizzards this year. Vacation have only played out a couple of times (Brad Oberhofer was in the live incarnation briefly.) But I really, really like the songs available as free downloads on Vacation's Bandcamp site. While I wouldn't call it synthpop, Vacation are definitely danceable, kind of groovy and motorik.  The track "Jean" in particular sounds like a hit to me, definitely check that one out.

That Coco 66 show also has the lately ubiquitous Widowspeak, and with Oberhofer that makes for a pretty good Saturday night. If you can't make it this weekend, Vacation are playing Pianos on May 22 with Dinner at the Thompsons.

It's a night of well-dressed pop at Glasslands with Princeton and the High Highs. I keep meaning to catch High Highs again, I was impressed when they played with Radio Department last year.

We haven't heard from locals Gray Goods since last year's Northside Fest. They emerge from their cocoon, sonically reborn, tonight at Union Pool, with Zachary Cale and D. Charles Speer and the Helix. 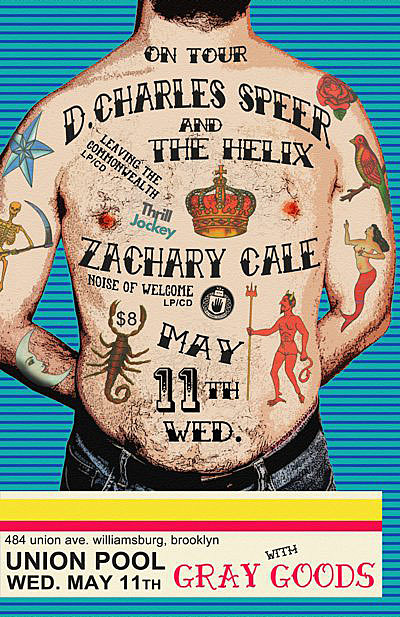 What Dirty Beaches lacks in band members he makes up for in attitude and atmosphere. See him and his comb at Mercury Lounge where he'll play with the gigging-est band in Brooklyn, Widowspeak. It's an early show.

Laugh it up at the first anniversary edition of monthly comedy/music/variety extravaganza SUPERSHOW which is happening at Coco 66. This month has a new short from Marcel the Shell director Dean Fleischer-Camp, some puppeteers from the Jim Henson Company, UCB's Blink-182 and more. Free! 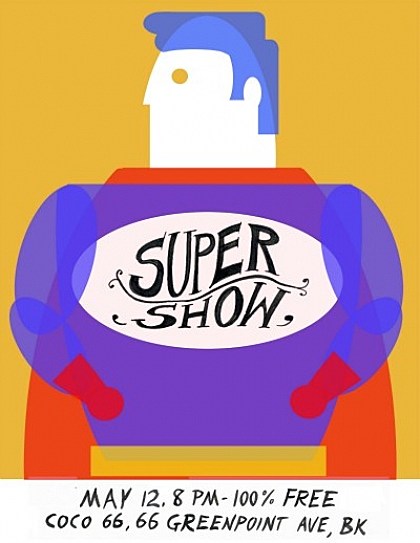 Do not go outside for fear of bad things happening!

Or go see  MEN and Savoir Adore at the second of the L Magazine sponsored AUDIOPHILE events happening at the Brooklyn Museum. Free with museum admission. Savoir Adore have a few more NYC area shows coming up and they're all listed further down. Be sure to check out their swell new single, "Sparrow," at the top of this post.

Weekends, Total Slacker and more are at Monster Island. Total Slacker, who have an album coming out sometime soon, are heading out on tour in a week and all those tour dates are below.

Rooftop Films kicks off its 2011 season tonight at Open Road Rooftop in the LES with a series of shorts and the spellbinding guitar skills of Dustin Wong. Tickets here.

Karaoke nights aren't too often notable, but this one is different. Austin's incredible live band Karaoke Underground are making (I think) their first ever NYC appearance at The Rock Shop. If you're an indie/punk fan, the song list is INCREDIBLE, everything from The Buzzcocks and The Fall to LCD Soundsystem, Pavement, Pulp, Yo La Tengo.... whoa this could be really fun.

And that wraps up this edition of This Week in Indie. Posters, videos, a thousand widgets, and tour dates are below. 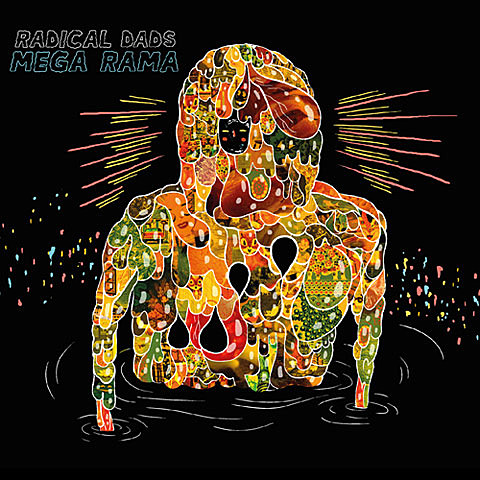 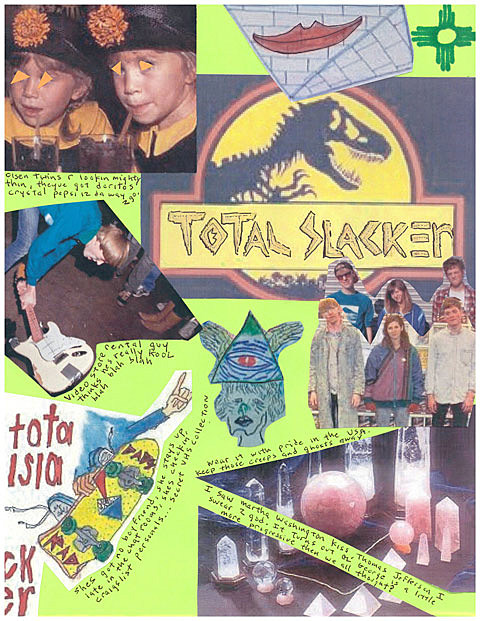