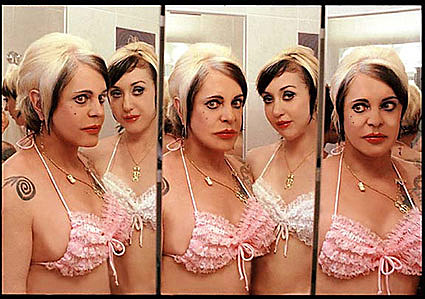 At the new PARTICIPANT INC. Gallery,

(between Norfolk and Suffolk)

Lady Jaye Breyer P-Orridge was one half of the artist BREYER P-ORRIDGE. S/he was also a member of Psychic TV/PTV3 and Thee Majesty. S/he passed from heart failure as a result of an undiagnosed complication in her 2 year struggle with stomach cancer.

Lady Jaye was an inspirational spirit and performer in the original House Of Domination at Jackie 60 in the 1980's and early 1990's. S/he performed in off-Broadway theatrical productions; was a member of BlackLips Theatre Cult ( with Antony of the Johnsons, the Dueling Bankheads, and Marti Domination amongst other underground luminaries) and was a catwalk model, actress in experimental movies.

S/he met her "other half" Genesis Breyer P-Orridge in 1993 at legendary author and diarist Ms.Terence Sellers secret abode and they both fell in love at first sight.

They were inseparable from then until her passing. Evenually creating an art project they called PANDROGENY in 1999 the focus of which was using surgery and identity to be visually and spiritually the same. Their love was a clarion call to evolution beyond gender and surpassing biology. When asked what her ultimate desire was s/he replied:

"I WANT TO BE REMEMBERED AS ONE OF THE GREAT LOVE AFFAIRS OF ALL TIME."