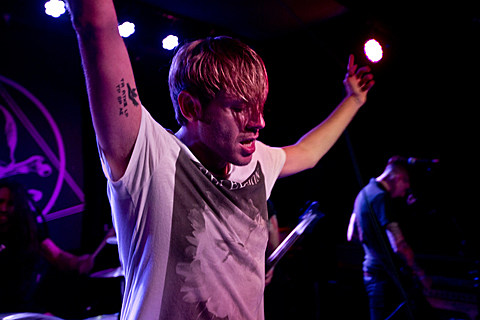 Former Thursday frontman Geoff RIckly has been a busy guy this year, having already put out releases with two bands he's currently singing in, post-hardcore art project United Nations and the synth rock band No Devotion that he formed with the remaining members of Lostprophets (the ones who are not in jail for unspeakable crimes). United Nations recently wrapped up a tour (check out pics from NYC) and now No Devotion will be hitting the road as well.

No Devotion's tour includes multiple dates opening for Neon Trees, but they'll be headlining some smaller shows too, including one in NYC on October 28 at Glasslands. Tickets for the NYC show go on sale Friday (8/29) at 10 AM. No Devotion also just put out a video for "Eyeshadow" from their debut single, which you can watch with the full list of tour dates, below.

Another band that hailed from the same NJ scene as Thursday, and whose debut album was produced by Geoff, My Chemical Romance, has also splintered into various new projects. Frontman Gerard Way has gone solo and is playing shows this year including NYC/NJ on October 20 at Irving Plaza, October 22 at Starland Ballroom and October 23 at Webster Hall. Tickets are on sale here for Irving and Starland, and here for Webster. MCR guitarist Frank Iero is now playing as Frnkiero Andthe Cellabration, and they've got some shows as well including NJ on September 6 at Gamechanger with The Scandals, This Good Robot and more. Tickets for that show are on sale now.

All of Frank and Gerard's dates are listed, with the No Devotion video and dates, below...