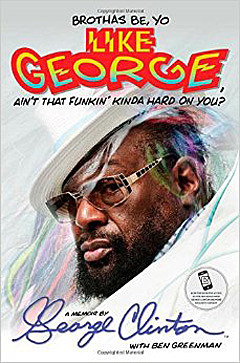 Funk legend George Clinton was in NYC last week (5/12) for a talk at Brooklyn Museum as part of the Red Bull Music Academy. The hour-plus conversation touched on his whole career, being sampled and more. You can watch the whole thing below. If you'd like to hear more from him, Clinton released a memoir, Brothas Be, Yo Like George, Ain't That Funkin' Kinda Hard on You?, last year.

Clinton will be back in our area soon, but with Parliament-Funkadelic, playing two free NYC shows: Queensbridge Park on July 15 as part of SummerStage, and then Brooklyn's Metrotech Commons on July 16 as part of BAM's free summer R&B Festival. The Metrotech show is at noon, and later that day P-Funk will play another free show, this time at Newark's NJPAC Theatre Square. Originally Clinton was to have played NJPAC on June 10 as part of a "House Party" with Kid n' Play and Full Force, but that was recently cancelled.

Then on July 19, Clinton and P-Funk play The Paramount in Long Island. Tickets for that show are on sale now. All upcoming dates are listed, along with video of Clinton's BAM lecture series, below...