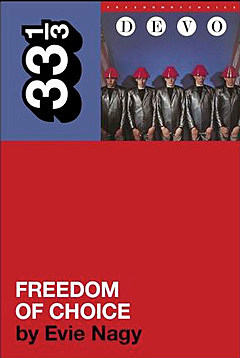 Devo's classic 1980 album Freedom of Choice celebrates its 35th birthday this year and coinciding is the release of Evie Nagy's 33 1/3 book about the album which was just published last week. In celebration of both things, there's a "Comedy Tribute to Devo" at Littlefield on Thursday (5/29) hosted by Jake Fogelnest and featuring the band's own Gerald Casale (UPDATE: Gerard had to cancel which is a bummer), plus Dave Hill, Sara Benincasa, Liam McEneaney, Joe Garden, Fort Lean and "special guests." Fred Armisen wrote the foreword to the 33 1/3 book so maybe if he's in town? Tickets are on sale. Flyer, a stream of Freedom of Choice, and videos for its title track and "Girl U Want," below.

In related news, Loser's Lounge will present a New Wave-themed edition -- B-52's Vs. Devo" at Joe's Pub on June 11, 12 & 13. If you've never been to a Loser's Lounge before, they feature the LL Orchestra (commanded by Joe McGinty) and a host of guest vocalists tackling the featured artists' songs. They're usually a lot of fun and tickets are on sale. 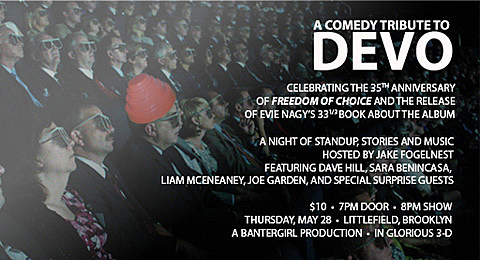