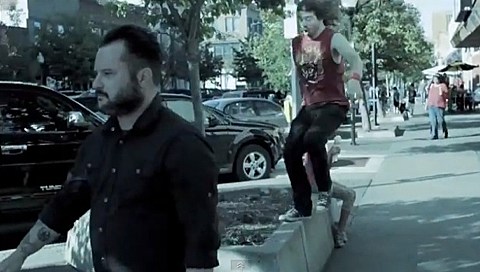 Get Up Kids frontman Matt Pryor released his newest solo album, Wrist Slitter, late last year via Equal Vision/Rory Records, and he's just made a video for one of its more Get Up Kids-sounding songs, "Kinda Go To Pieces." The video starts with a short acoustic guitar/vocal intro by Bob Nanna of Braid (which originally appeared as the intro to "Before My Tongue Becomes a Sword," also on Matt's new album), and then stars 2013 Air Guitar World Champion Eric "Mean" Melin, who follows Matt around against his will, providing him with air guitar solos. I won't give too much away, but it's got a happy ending. The video makes its premiere in this post, and you can watch it below.

Matt's got some dates coming up (unfortunately none in NYC), including a show in his home state of Kansas, where he'll be performing with an ensemble of horns, strings and more, and recording it for a future release. The rest of his dates are in Europe, and all are listed, along with the new video, below...