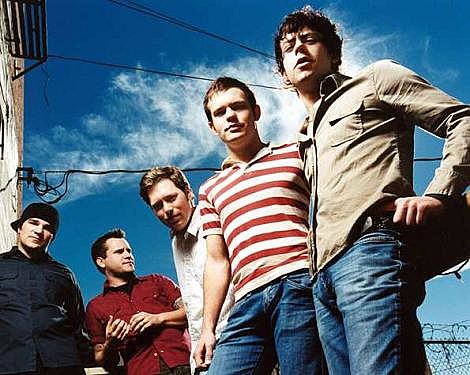 The Get Up Kids came back strong earlier in the year, playing a few shows including a pair in the NYC-area at Bamboozle and a quickly sold-out Gramercy Theater (setlist below). Now comes word that the band has added another huge tour with THREE more NYC shows: Oct 30th at Gramercy, Halloween at Irving Plaza, and Music Hall of Williamsburg on November 1st. Support for MHOW will come from Kevin Devine and The Life & Times. Presales are going on right now for the whole tour. MHOW tickets go on general sale on July 23rd at 1PM which is also when Irving Plaza tickets go on sale. Gramercy tickets aren't up yet as of this posting. All dates below.

On a related emo-but-don't-call-me-emo note, Jonah Matranga has scheduled a show at Southpaw in Brooklyn for August 10th (tickets here), but much more interesting is a show that he is putting a few days later in LA:

Aug 13, 14, 15: onelinedrawing at Knitting Factory LA
A onelinedrawing 'reunion'? Why not? :) The plan is to play the entire onelinedrawing catalog over 3 nights, should be fun. And yes, the robot will be in full effect :)

While you could hardly call a solo project a "reunion" (which judging by Jonah's quotes, he knows that), the entire catalog over three nights could be very interesting. Tickets for all three nights are here or get individual nights "with a treat" here.

In other Jonah related news, Far recently announced "The Scream-A-Long Project" where they asked their fans to participate by contributing gang vocals to an upcoming song.

Full tour dates for The Get Up Kids & Jonah Matranga, and some videos, below...