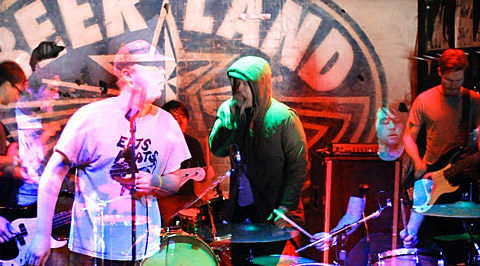 Austin label Monofonus Press will release a new compilation of bands from its hometown, including Spray Paint, S U R V I V E, Hidden Ritual and more. It's called We Jam By Condos, which not only references The Minutemen, but also the state of affairs of trying to be a working class artist in a city in 2015. All the songs are exclusive to the comp and we've got the premiere of lead cut "Plants" by Ghetto Ghouls. The song's repeated, bleated refrain of "We're an American band... in a Japanese van" seems to pull from the same dichotomy. You can stream it below and you can pre-order We Jam By Condos now. Tracklist and cover art below.

Spray Paint, who just toured through NYC, will release Punters On A Barge in June (one of two new albums on the way from them). Check out a track from that below as well.

Ghetto Ghouls, Spray Paint, S U R V I V E and more will be playing a couple We Jam by Condos release shows in Austin on May 15 & 16 and details on those are below.