Ghost @ The Studio at Webster Hall (more by Greg Cristman) 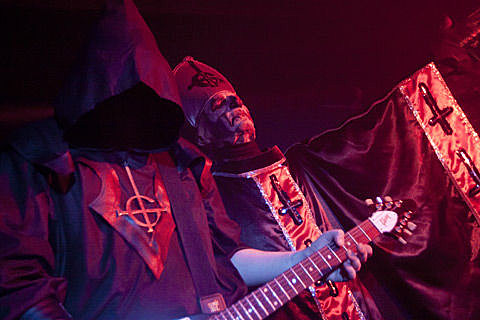 Due to some last minute complications with our visas, we have been forced to cancel our North American tour.

We are sorry towards the other bands on the tour, Enslaved and Alcest, and we wish them a very joyful tour without us.

And we are most of all tremendously sorry towards all of our fans.

This is truly beyond our control and we are making everything within our (His) powers to be able to come back to the US as soon as possible and perform for all of you.

Thank you all for your support!

Our most malicious of wishes

/A Nameless Ghoul
on behalf of GHOST

Those dates include Gramercy Theater on September 25th (tickets). All affected tour dates are below.

In related news, the mysterious GHOST frontman's identity may have been revealed.