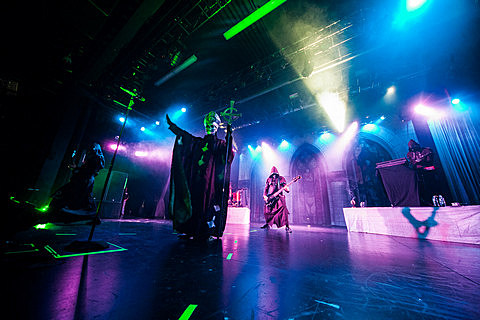 Sweden's not-actually-that-metal band Ghost put out the first single form their upcoming third album Meliora back in May, and today they released another new one, "From The Pinnacle To The Pit." Ghost usually remind me of Blue Oyster Cult, another band with metal associations, songs about The Reaper, and a kinda metal-looking logo, but whose best known songs aren't really very metal. I'm not sure they've ever reminded me of Alice In Chains though, which is what immediately comes to mind when listening to this new single. The intro sounds like a straight homage to "Would?" and he comes pretty close to their vocal style when belting out "It is a looooong waaaaaay dooooowwwwnnnn." They bring back the Ghost of old on the song's pomp rock chorus, and hearing those two sounds flow together on one song works surprisingly well. Listen below.

Ghost's tour with Purson hits NYC on September 27 at Terminal 5. Tickets for that show are still available.

In sorta related news, it's rumored that one of Ghost's anonymous members is Tribulation guitarist Adam Zaars, and if you like Ghost but haven't checked out that band's new album, you should probably fix that.