Ghostface at Rock The Bells 2011 (more by Dana (distortion) Yavin) 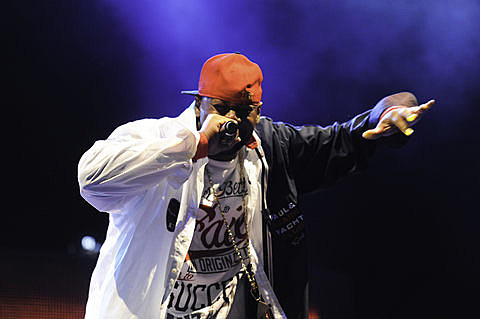 Lyricist Lounge will celebrate 20 years of events and releases with a free Celebrate Brooklyn show at Prospect Park on June 23rd. Ghostface Killah (who celebrated his birthday yesterday, May 9th!) will join the kings of "Luchini" Camp Lo, Astro, and more for this FREE event that kicks off at 7:30. Ghostdeini currently has no other US dates planned, but will go on the road for a string of Australian dates at the beginning of June. Details are below. Check out the full Celebrate Brooklyn schedule HERE.

In other classic hip hop news, Prodigy of Mobb Deep will team up with The Beatnuts, Heems of Das Racist, DJ Rob Swift, Big Baby Gandhi and more as part of an event called "Queens Day" on 6/19 at Irving Plaza. Tickets are still available. Prodigy recently completed recording of his new album HNIC3, which is due for release on July 3rd. Stream the recent track "Gangsta Love" featuring Esther below.

All Ghostface Killah dates, some video, and that Prodigy stream is below. Pay close attention to the tail end of that "Luchini" video and you'll see Butterfly of Digable Planets (aka Ishmael Butler) drop a verse from Camp Lo's "Swing". Butler's new project Shabazz Palaces play Williamsburg Park this summer.

Camp Lo - Luchini (AKA This Is It)