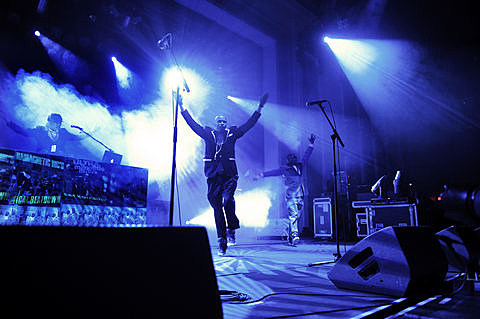 As mentioned in What's going on? last night, Prodigy's upcoming "Queens Day" show at Irving Plaza, which was supposed to happen next week (6/19) has been cancelled. Though he did play a private Rock the Bells kickoff show at Santos Party House last night (6/13) with (according to the flyer) Ghostface Killah, DMX, Jadakiss, and Hit Squad

Q-Tip's "Offline" party (a DJ gig), also scheduled at Irving Plaza, is still set to happen this Friday (6/15) at the Manhattan venue.

Ghostface Killah's other upcoming shows include the free Prospect Park show on 6/23, a Wu-Block party at Highline Ballroom (8/8) (tickets on sale 6/15), and Rock the Bells with Wu-Block. The Highline show is only with Ghostface and Sheek Louch, but for Rock the Bells, the whole crew will be there (Ghostface, Raekwon, Sheek Louch, Jadakiss, and Styles P).

Meanwhile, Raekwon will be in NYC for the previously discussed Best Buy Theater show (7/26) with Tyler, the Creator, and Earl Sweatshirt. Tickets for that show go on sale Friday (6/15) at noon.

Ghostface and Raekwon play a free show together, and much sooner, in Toronto as part of NXNE on Sunday (6/17). Action Bronson, who plays a free show in Red Hook Park (6/19), will be at the Toronto fest too. The entire music portion of NXNE kicked off yesterday (6/13) and runs through the weekend.

Killer Mike will be at NXNE too, and his tour with El-P, Despot, and Mr. Muthafuckin' eXquire kicks off on Tuesday (6/19) in Atlanta. It hits NYC on July 13 at Irving Plaza. Ticketsplayed SOB's with Spaceghostpurrp in celebration of Purrp's new album, Mysterious Phonk. Purrp's also got a couple Shortcuts parties under his belt. Speaking of, one of those (sans Purrp) goes down at Santos TONIGHT (6/14) with Fat Tony and Fat Trel (tickets).

While NXNE is going on in Toronto, Brooklyn will be getting its own multi-venue music festival with Northside Festival, which also happens this weekend.

As mentioned, Kool Keith plays a Northside show at Brooklyn Bowl TONIGHT (6/14) with Lushlife. Lushlife recently dropped a remix of "She's a Buddhist, I'm a Cubist" with Angel Deradoorian, Cities Aviv, G-Side, Big Baby Gandhi, Deniro Farrar, and KDz Kenny Dennis. You can stream that below Tickets are still available for the Brooklyn Bowl show and we're also giving away a pair. Contest details are below.

As usual, Questlove will DJ the Brooklyn venue after that show (tickets). 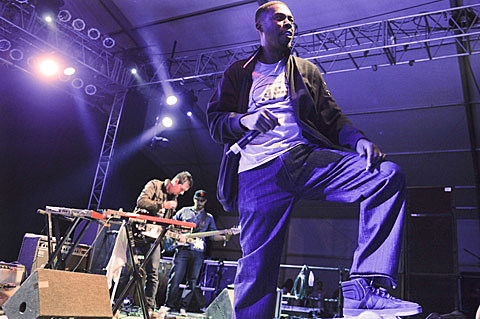 And speaking of hip hop Northside shows at MHOW, GZA (backed by Grupo Fantasmo like he was a Bonnaroo) plays two (early and late) shows at the venue TONIGHT (6/14). Both are sold out, but you can try and get in with your Northside badge.

Aside from Kid Sister at Sugarland on Saturday (6/16), not much more hip hop is happening at Northside, but there are other good hip hop shows tonight and this weekend.

Yasiin Bey (formerly Mos Def) plays the previously discussed show at the Apollo Theater TONIGHT (6/14) as part of Blue Note Jazz Festival. Tickets for that show are still available FOR THE SHOW THAT HAS BEEN RESCHEDULED FOR OCTOBER 28th.

EPMD and DJ Scratch play a free show at Herbert Von King Park TONIGHT (6/14). They also team up for a NYC show at BB King's on July 18 with Marley Mari and Big Daddy Kane. (tickets)

Hip hop producer RJD2 DJs a party for the ongoing 'One Step Beyond' series at the American Museum of Natural History on Friday (6/15) with Cosmo Baker, Import/Export, and visuals by Glowing Pictures with special guest Shantell Martin. Tickets for that are available.

You can also catch Tech N9ne and Machine Gun Kelly on the Hostile Takeover Tour which takes over the NYC area on Saturday (6/16) at Starland Ballroom in NJ (tickets) and Sunday (6/17) at HIghline Ballroom (tickets). Be careful during Machine Gun Kelly's set though; TMZ reports that he was just sued $15,000 for slicing open a bouncer's finger. Ouch.

Once all the Northside craziness ends, you can catch Ab-Soul at his previously discussed NYC show on Thursday, June 21 at SOB's. Tickets for that show are still available.

In other hip hop news, you can stream Black Milk's Live at Third Man Records in its entirety and J-Dilla's posthumous Rebirth of Detroit in its entirety below, along with other song streams and contest details for tonight's Kool Keith show.

--
For a chance at winning tickets to Kool Keith and Lushlife at Brooklyn Bowl TONIGHT: either tweet something that includes both @BrooklynVegan AND "KOOL KEITH" in the tweet, or send an email to BVCONTESTS@HOTMAIL.COM with the subject line "KOOL KEITH". Include your first and last name in the email. We'll pick a winner at random and contact them with more details. If you enter by email, it will not be shared with anyone else. Good luck!