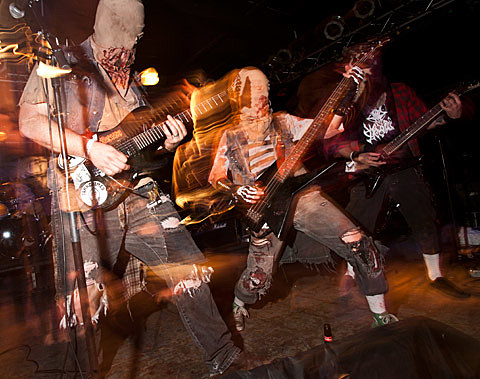 Creepsylvanian crazies Ghoul have tacked on a few more shows to their upcoming jaunt with Black Anvil and Skeletonwitch. Their September trek will now be three shows longer -- though sadly Skeletonwitch-less for those specific events -- thanks to new stops in Charleston, New Orleans, and NYC's Saint Vitus on September 9 with Mutant Supremacy and Grudges providing support. Tickets are available now. The updated tour slate appears below.

Speaking of Skeletonwitch, the band is on the short list of acts that have an invitation to play the new Lucky 13. Invisible Oranges' Scab Casserole had a chat with Lucky 13 bar owner Melody Henry about the new location and also asked, "Who are some bands you'd love to see come through and play Lucky 13?" Melody:

I'd love to see Goatwhore and Skeletonwitch play, and Jeff says Author Punisher and Dax Riggs!

Of course, Skeletonwitch are no strangers to the bar's old Park Slope digs. Elsewhere in the interview, Melody ran down the most famous metal musician they've had come in, the most fun, and the hardest drinking:

1. Brent Hinds of Mastodon. 2. The Melvins. 3. Brent Hinds tied with Dax Riggs of Acid Bath, who actually passed out in the bathroom for a little while!

Huh. Guess we should've asked Bill Kelliher if Brent had any good hangover remedies. I bet he does.

Which brings us back around to Mastodon, who are streaming the freshly remastered version of first album Remission on the Relapse Alumni Bandcamp. The record was remixed by Matt Bayles and remastered Ed Brooks, giving the 12-year-old LP a decent dusting. You can stream it in full below. And, of course, you can catch Mastodon on tour with Gojira and Kvelertak this October.

The updated Ghoul dates are listed, along with the re-done Remission stream, below.