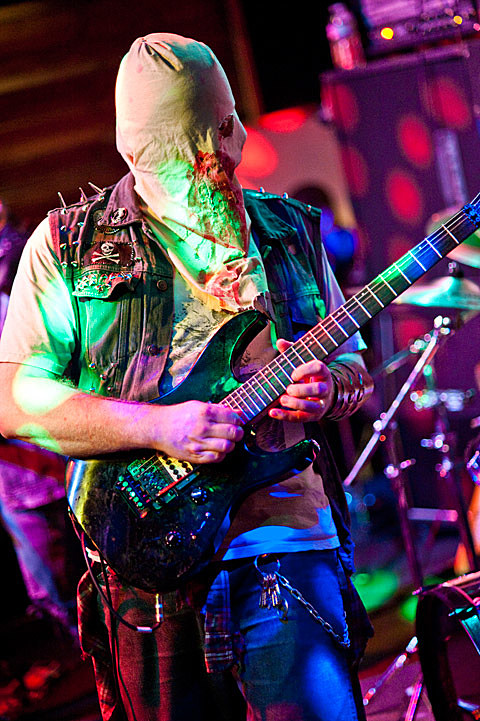 If ever there was a match made in tour-pairing heaven, its Ghoul with Gwar on the upcoming Return of the Maggot tour. Both Gwar and Ghoul practice faceless heavy music with a ultra-black sense of humor. Both aren't afraid to let a little blood spray on the crowd. Both have a highly entertaining live show. But while Gwar's chemistry relies heavily on stage theatricality, Ghoul's is quite the opposite, using minimal stage props and focusing on what matters the most, well-honed songwriting.

If you believe the rumors about Ghoul's genetic makeup, it makes sense that they'd crank out excellent records; the nameless, faceless fiends may or may not contain members of Ludicra, Dystopia, Stormcrow, Impaled, Asunder, Engorged and many others. And while Ghoul is definitely a serious band, they're definitely one to disembowel you with their blunt-death metal riffs and then make bad jokes while they play with your spilled entrails. Metaphorically speaking. I hope.

Ghoul is preparing to follow-up 2006's Splatterthrash with their latest opus of guts & gore Transmission Zero. The new LP, currently up for preorder, hits the racks on November 8th, but you can preview four of the eleven songs below. Check out "Off With Their Heads", "Blood Feast", and "Metallicus Ex Mortis" below alongside the album title track, which makes its debut here. Listen to those those alongside previous releases Splatterthrash and We Came for the Dead / Maniaxe also streaming below.

The Return of The Maggot tour kicks off today (10/18), so make sure and catch Ghoul (like at Irving Plaza on 10/23, tickets) at the dates below.