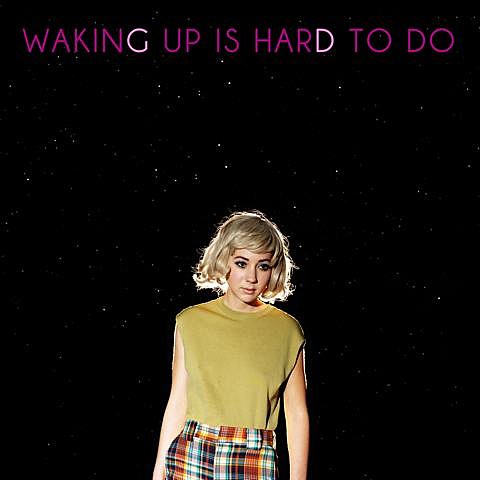 Eight years after their much-loved 2005 debut, Hearts and Unicorns, not to mention more of their fair share of label woes and personal hardships, Giant Drag have finally released their second album. (Is it just coincidence that this and the new MBV record came out within a week of each other?) Titled Waking Up is Hard to Do, it came out somewhat quietly this week. Spitfire singer Annie Hardy elaborates on its difficult birth:

So it wasn't the best PR move or in best interest for my career in general but I decided to stop talking about Giant Drag's album Waking Up Is Hard To Do until something was happening. People who talk about shit but never have anything to show for it are the worst, so I put my head down and started working. I found it somewhat easy to concentrate on work with most people I've ever been friends with for some reason thinking I am still living in Orange County.... Nope I have been in LA since May of last year, I was just a little too psycho to tell you about it! So yeah, I am back here in LA, doing my thing, seeing what works and what doesn't for the new me and wouldn't you know it, Giant Drag might be living up to it's nU grunge, bummer of a (brilliant) name and all signs point to a nice change of musical pace for me. I can't fake it, I don't want to. Giant Drag has felt like one big lonely abscessed tooth that needed to be pulled to make way for a colony of new, better, whiter, faster, catchier teeth to take it's place. I know some of those characteristics don't apply to teeth but humor me, I've been working like a dog with Ann Jones day in and out.

Unfortunately, it looks like Hardy is ready to move on now that she finally got this sucker out and Giant Drag are no more. Hardy now plans to focus her energy on her Full Psycho label and other endeavors. (Read more about her plans here.) But there is the new album, which is full of Giant Drag's signature super-crunchy rock. No cat solos this time but plenty of hooks, acerbic humor and attitude. You can stream the whole thing below.