OUR SHOW AT MERCURY LOUNGE HAS BEEN CANCELLED DUE TO A SINK HOLE IN HOUSTON STREET... YES YOU READ THAT RIGHT. STAY TUNED. - EX-CULT 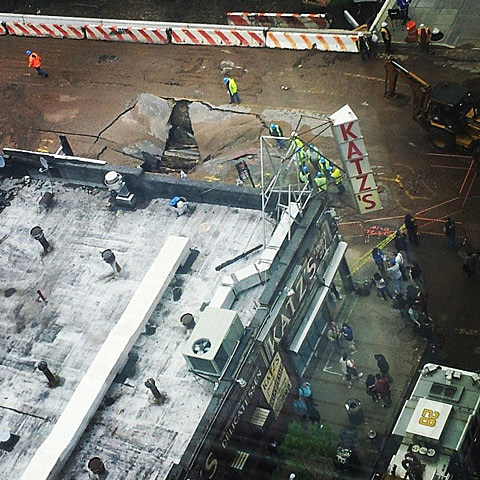 A 55-year-old city water main ruptured outside of the famed Katz's Delicatessen on the Lower East Side Thursday, creating a rushing flood and a massive sinkhole to form in front of the iconic restaurant, officials said.

The water main underneath E. Houston St. near Ludlow St., which was installed in 1959, broke just before 11 a.m., officials said.

Work crews are currently excavating the ground to fix the main, according to a DEP spokesman. It was not immediately revealed when it will be fixed. - [NY Daily News]

That giant sinkhole on Houston St. hasn't stopped Katz's from dishing up sandwiches but it is putting the kibosh on shows at Mercury Lounge tonight (5/22): the early show with Stone Jack Jones, Wooden Wand, Coupler, and lylas, as well as the late show with Ex-Cult and Pampers. They're currently trying to get both shows moved to different venues, but no word yet. Stay tuned. (Ex-Cult also play Acheron on Friday.)

UPDATE: The Stone Jack Jones show will now happen at The Delancey (doors: 6:30 PM). Admission is $10 at the door ($2 less than Merc) and all tickets purchased for Mercury Lounge will be refunded.

UPDATE 2: As a tweet from Merc points out, The Ex-Cult show was moved to Fontana's. Refunds are available at point of purchase.

VIdeo of the mess below...