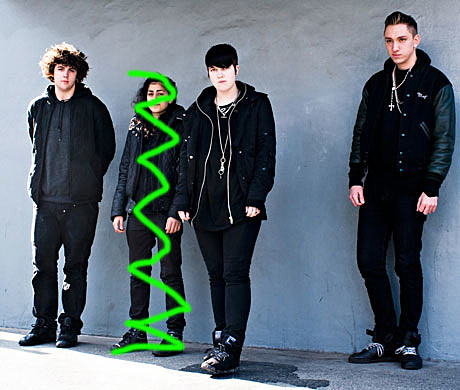 When I got to the xx show at Bowery Ballroom last night (11/11), I was told by someone reliable that Gil Scott-Heron was planning on joining the headlining UK band on stage for some songs - both with them and on his own for a few. At first I thought that was completely random. Then I realized that the xx's label XL Recordings recently announced that they signed Gil. They'll be releasing "I'm New Here", his first album since 1994's "Spirits", on Jan. 11, 2010. And according to jamespenycate, "The XX are remixing the entire Gil Scott Heron album". You can listen to four song clips, and watch video of Gil in the studio, at imnewhere.net.

Fellow UK musician Jon Hopkins opened the show with a set of solo electro that had him pushing all kinds of buttons on stage to the delight of those that bothered to check him out. "Hopkins's third album, Insides, was released by Just Music in conjunction with Domino Records on May 5, 2009."

I'm in love the xx album, so seeing them live can't be that bad, which it wasn't, but it's nowhere near as good as the album. The young band will hopefully improve their show over time. The annoying crowd (people were talking through the performance on every side of me... and there was at least one person who answered her cell phone) generally appreciated it though - there was lots of clapping especially for favorites like "Basic Space". The band said it was good to be back in NYC which they said was like their second home. It's true. They played a bunch of shows here before CMJ and then a bunch more during CMJ, and they'll be back again in December with Friendly Fires. Tickets are still on sale for that Webster Hall show.

The video for "Basic Space" and some Gil Scott-Heron clips, below...