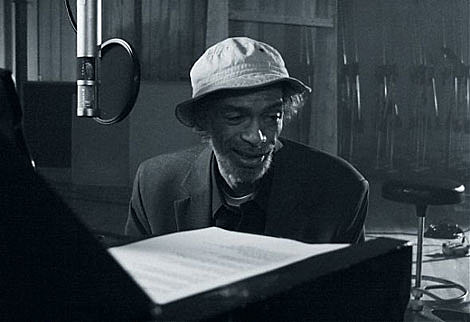 Gil Scott-Heron's latest album, I'm New Here, is to be remixed by Jamie Smith of the xx. The London trio's beat-maker, bass-rumbler and synth-player has been commissioned to rebuild the poet's celebrated LP, using just Scott-Heron's vocal track rather than the original music.

Although billed as a remix by the xx, singer/guitarist Romy Madley Croft wanted to "set the record straight" in an interview this week with BBC 6 Music. "The remixing side of things is very much Jamie," she said. "He's known as Jamie xx so people just write the xx, but I can't take credit for all the work that he does. But I have heard some of [the I'm New Here remix], and it sounds brilliant."

[Gil Scott-Heron] appeared at an xx gig with the idea of performing "an impromptu song in the middle of our set", Smith said. "It never happened for various reasons, but still it was really good to meet him."..."They just gave me the parts and let me do whatever I want, so I've been doing it on my laptop on tour," Smith said. "I'm am only using [Gil's] vocals, I'm not using any of the original music from it, which is very freeing." [Guardian UK]

The gig they're referencing was at Bowery Ballroom in NYC in November.

Gil Scott-Heron played two nights at the Blue Note in NYC ealier this month. His next NYC show will be at Littlefield on Friday, March 26th where he'll be performing along with Talib Kweli and saxophone player Gary Bartz in conjunction with the Tenth National Black Writers Conference at CUNY's Medgar Evers College the same week. Tickets are on sale.

His other upcoming shows include San Francisco tonight (3/17) and Coachella, where the xx are also playing. All dates, a Blue Note review, info on the above-mentioned conference, a show flyer and video from a February Gil Scott-Heron show are below...

The set I was going to see was the last set on the last night of a two-day performance at The Blue Note. When I get to the venue there's a line outside where I see a group of folks raising their hands for the doorman to select them to go in. The place was packed...All table seats were taken and there was standing only space available at the bar, which is what I paid for. I could barely see the stage from where I was standing, but I didn't care I just wanted to hear "The Voice" and feel the vibration of the music.

The first song he begins with is the song that has become heavily sampled by several Hip-Hop artists, We Almost Lost Detroit. In particular Gil jokes that when he heard Common's song "The People", it was so good that he had to go back and listen to his own song to see if it was still any good. He then points out several other Hip Hop artists like Talib Kweli and Kanye West who have sampled his work and made contributions to music that he appreciated. During the song he brings out the first member of his band for the night, keyboardist Kim Jordan. Jordan was nothing short of amazing and a virtuoso playing with equal parts speed, precision and passion. We Almost Lost Detroit transitions smoothly into the motivational activist's anthem Work For Peace where Gil tells people "...Peace ain't gonna be easy...If you say you're about peace...gotta go to work". Gil then brings out his other two band members Glenn Turner on harmonica and Tony Duncanson on percussion. They continue to go through songs such as 95 South, the angelic tribute to his daughter "Your Daddy Loves You", the piano laden "Pieces of a Man" and "Show Bizness"...[Daily Merger] 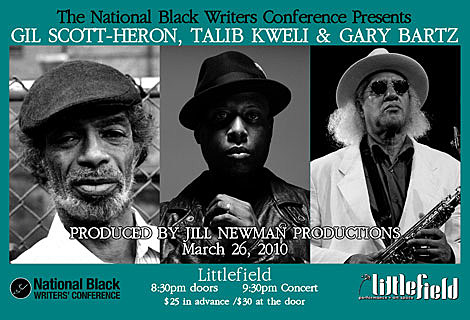 It is appropriate that this concert occur in conjunction with the Tenth National Black Writers' Conference (NBWC) at Medgar Evers College. The Conference, a program of the Center for Black Literature, will be held from March 25 to 28, 2010 at the College. Celebrating more than 25 years of history since its inception in 1986 under the visionary leadership of John Oliver Killens, the Conference assembles some of the brightest minds and finest pens in literature. Its theme, And Then We Heard the Thunder: Black Writers Reconstructing Memories and Lighting the Way, is symbolic of both the work and life of Toni Morrison and of the collaboration between Gil Scott-Heron, Talib Kweli and Gary Bartz. Gil, Talib and Gary draw from the past and bring symbolize a dynamic group of artists who are charting trends and shaping the future of music and the spoken word.