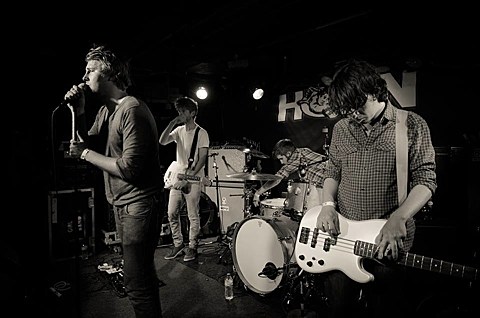 UPDATE: Girl Band have had to cancel their shows due to problems with U.S. immigration.

Dublin Ireland quartet Girl Band (all-guys, for the record) have been making a racket since 2011 and have released a handful of 7" singles so far, most recently "De Bom Bom" which came out back in September. That song, like a lot of what they do, hits hard with noisy, loud guitars and shouted vocals in the fine punk tradition of McLusky or The Fall. (Or, the shouty punks of your choosing.) Girl Band have just signed with Rough Trade and the fruits of that should bear out in 2015.

Bill wrote the above about Girl Band recently, and since then they were announced for this year's Burgerama. Now they've added more US dates happening sooner than that -- a run of three NYC shows in January. The first happens January 14 at Baby's All Right with Big Ups, which is a very cool pairing. Then they play January 15 at Elvis Guesthouse (a new space?) and January 17 at Palisades with Slim Twig, his past tourmate U.S. Girls, and Bottoms. Tickets for Baby's are on sale now. More info on the other two shows TBA.

All Girl Band dates are listed, with a stream of a recent single, below...