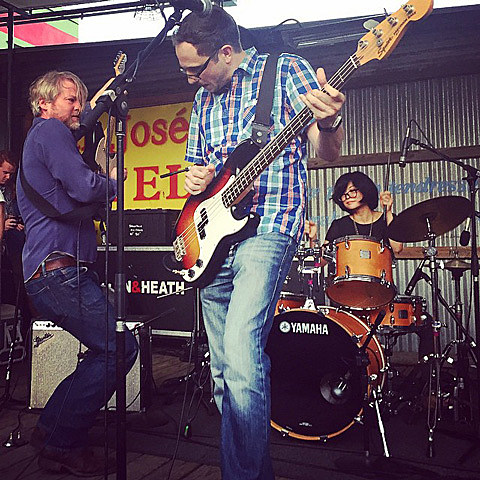 This weekend in Austin is the ATX Television Festival and one of the big events is a Gilmore Girls reunion that happens tonight (Saturday, June 6) featuring Lorelei, Rory and Emily (Lauren Graham, Alexis Bledel, Kelly Bishop), show creator Amy Sherman-Palladino, plus a dozen or so more cast members (Luke, Michel, Paris and more). Gilmore Girls ended its seven-season run in 2007.

There was a more specific reunion on Friday night (6/5), as Stars Hollow's finest (only?) band, Hep Alien, reunited for a surprise gig at Austin's Hotel San Jose. The band, featuring Keiko Agena (who played Lane), Todd Lowe (Zach), and John Cabrera (Brian) played a 20-minute set of covers including Blondie, Pixies, White Stripes, Beyonce and a rendition of Carol King's "Where You Lead" which was the Gilmore Girls theme song. Unfortunately, neither original guitarist Dave Rygalski (Adam Brody), or his replacement, Gil (Sebastian Bach), were in attendance. You can watch their cover of "Where You Lead" below and the whole set can be watched here.

In other news, popular podcast Gilmore Guys will be taping an episode live at Brooklyn's The Bell House on July 13. The original event sold out, so they have added a late show (10:30 PM) and tickets are still available.

Video and a few more Instagrams from the Hep Alien reunion, below...