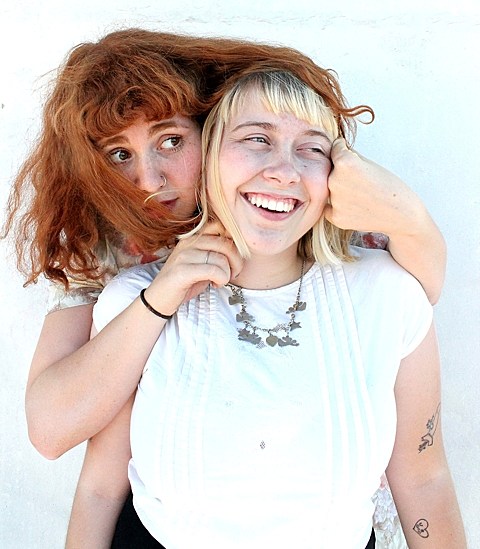 Teenage LA duo Girlpool put out their self-titled debut EP on bandcamp earlier this year, and it quietly began picking up buzz in places like The Le Sigh, who wrote:

Comprised of Harmony and Cleo, the Los Angeles duo is skilled at writing songs that are so unbelievably catchy, you can't help but put each one on repeat for an hour (or two or three...). There is no doubt these girls have talent when it comes to ultimate girl-power jams like "Love Spell" with the lyrics "Love spell / Go to hell / Drink my wine / Everything's fine" that practically beg to be sung along with all your friends on at 3 a.m. on a Friday night.

Maria Sherman also included it in her list of the 20 Best Tapes of 2014 So Far for Wondering Sound and later interviewed them for the same site. Here's an excerpt from that on writing songs about sex:

I think the thing that freaked me out the most was the way people were getting the message -- especially younger girls. A lot of young girls listen to our music and identify with it. It's really easy to feel empty when you're 13 years old and a girl -- especially when it comes to your sexuality. It's something you're about to explore and it's something you know nothing about. When you hear that song, it's easy to [want to] fill that void that you have inside yourself with sex -- to be validated by another person. My greatest fear is that a teenage girl will come to our show feeling empty and will hear that song and think "Ok, I'm just going to do that. That might make me feel better."

The duo have now signed to Wichita Recordings (Cloud Nothings, Waxahatchee), who will reissue a remastered version of the EP physically and digitally on November 18. It's since been taken off bandcamp (you can still listen on Spotify though), but you can stream one track, "Jane," below.

Girlpool have some California shows coming up this month, including the LA stop of the Radiator Hospital tour, and then they'll make their way to NYC in October where they have four shows scheduled, including two during CMJ. They play the soon-to-close Death by Audio on October 18 and Silent Barn on October 19, both with Slutever, and then the KXLU unofficial CMJ showcase on October 23 at Death by Audio and the Father/Daughter CMJ showcase on October 24 at Silent Barn. Stay tuned for full lineups, and possibly more NYC shows added while they're here.