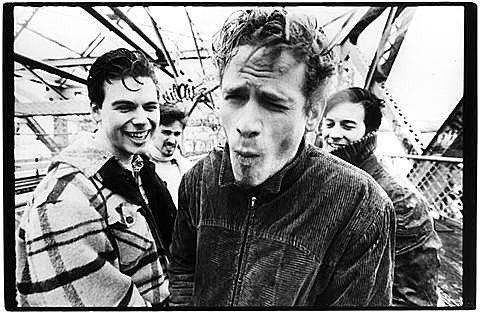 Girls Against Boys, aka GVSB, began as a studio lark for keyboardist Eli Janney (now also a busy record producer) and Fugazi drummer Brendan Canty, both regulars on the Washington DC punk scene. They were joined by Scott McCloud, singer/guitarist in the city's Soulside, for the industrial disco that would make up the "Eighties" portion of Nineties vs. Eighties. With the arrival of two more Soulsiders -- Johnny Temple joining on bass and Alexis Fleisig replacing Canty -- the second half of the six-song EP paints a more accurate portrait of the newly christened Girls Against Boys' future direction. On "Jamie" and "Kitty-yo," the more straightforward punk aggression is cut with a dose of sleaze, as McCloud's voice flirts with a decadent croon. - [Trouser Press]

As mentioned, DC post-hardcore vets Girls Against Boys are back in action, celebrating the 20th anniversary of Venus Luxure No. 1 Baby. European tour dates were already announced and though a full North American tour hasn't been announced yet, GvB will play NYC on September 11 at Bowery Ballroom. Tickets to that show go on AmEx presale on Wednesday (4/24) with the general on-sale happening Friday (4/26) at noon.

Did anyone out there go see GvB at Bowery in July '07 when GvB played Venus in full? All tour dates are listed, along with a YouTube stream of Venus Luxure No. 1 Baby, below...