Girlschool back in the day 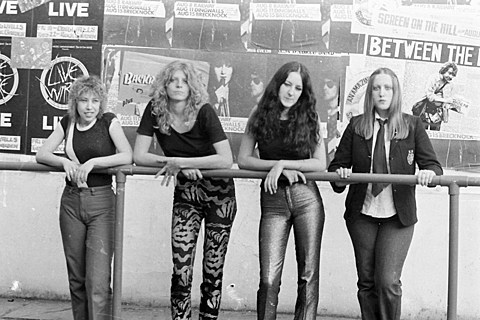 Although the Runaways preceded them by several years, Girlschool was one of the first all-female outfits to emerge in the male-dominated world of heavy metal/hard rock, helping to pave the way for similar groups of the future. Originally formed in South London during 1977 by bassist Enid Williams and vocalist/guitarist Kim McAuliffe (along with a few other members), the group was first known as Painted Lady. Eventually the pair came across permanent members Kelly Johnson (guitar, vocals) and Denise Dufort (drums), and switched their name to Girlschool by 1978.

...The quartet's 1980 debut, Demolition, reached the U.K. Top 30, but was surprisingly not issued in the U.S. (despite spawning four popular singles back home: "Emergency," "Nothing To Lose," "Yeah Right," and "Race With the Devil"). Girlschool's sophomore effort, 1981's Hit & Run, proved to be even more successful, peaking at number five on the British album charts, while a collaboration with their pals in Motörhead, an EP called The St. Valentines Day Massacre, hit number five on the British singles charts (due in part to the irresistibly raucous track, "Please Don't Touch"). Hit & Run would also turn out to be the first Girlschool album issued stateside. [Allmusic]

The tour brings them to NYC for a show on June 14 at Saint Vitus with Crucified Barbara, Old James and Velvet Black. Tickets for that show are on sale now.