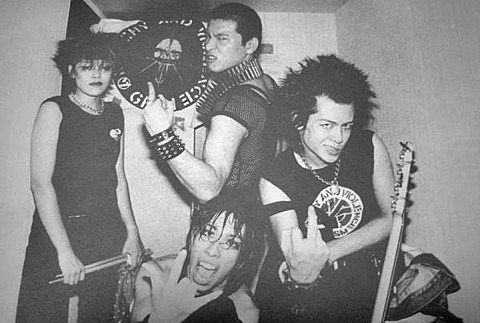 G.I.S.M. were notorious for their confrontational attitude and violent live performances; frontman Sakevi was known for being particularly dangerous and unpredictable during live shows. Sakevi's live antics include running into the crowd with a chainsaw, attacking front rows with a lit flamethrower, beating random concertgoers with a club, and firing gun shots on stage with a revolver. Sakevi is also known to attack journalists and photographers who try to approach him. [Metal Archives]

Japanese crust punks G.I.S.M. got their start in the early '80s, and continued through the early '00s, releasing their final album SoniCrime TheRapy in 2001 and playing their final show in 2002. They've continued to be influential and grow their cult following since then, and now the band has announced a reunion for 2016. They're playing the Roadburn Festival in the Netherlands (April 14-17), which will be their first show outside of Japan ever. Curator Lee Dorrian talks about the booking, via Roadburn's site:

Over the years I've been fortunate enough to have been involved in some pretty amazing activities. This achievement is fairly high up there, in terms of things that have excited me the most. When I got asked to curate Roadburn 2016, I obviously drew up a list of favourite bands and started a process of elimination. I tried Rudimentary Peni but, alas, it was not to be. Then I thought about G.I.S.M..... I thought it was an extremely long shot for many reasons. Mainly because I knew that they had never performed outside of Japan but also, they hadn't even performed a show in Japan for over a decade.

Back in '93 whilst in Tokyo with Cathedral, G.I.S.M. vocalist Sakevi came to the show and invited me and some others back to his apartment the next day, where we all hung out, got stoned and watched human dissection videos (!) amongst other things. It's a night I will never forget. It's hard to under-estimate the influence that G.I.S.M. has had on extreme music, particularly hardcore punk over the years. I would say that alongside Discharge, they are probably the most influential in the raw and dirty world of metallic-edged, proper, noisy, hardcore.

Anyway, via mutual friends, I managed to track Sakevi down again and put forward a serious offer for G.I.S.M. to come over and perform at Rituals For The Blind Dead. After a couple of mails backwards and forwards, he agreed to come and play. I still can't quite believe that this is actually happening but the flights are booked and they are getting ready to come and boot you so brutally fucking hard in the ass!!!

The rest of the Roadburn lineup includes Neurosis, Paradise Lost, With The Dead, Misþyrming, Amenra, Abysmal Grief, Tau Cross, Pentagram and more. Tickets are on sale.

Stream G.I.S.M.'s debut album Detestation and watch a live video of Sakevi with a flamethrower in 1986, below...