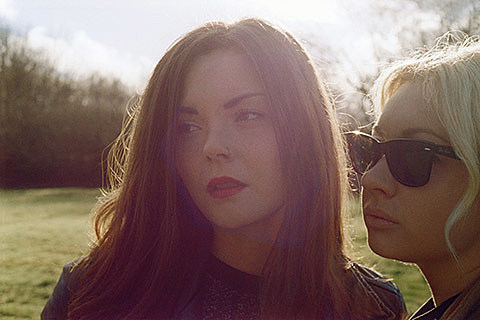 Honeyblood are a duo from Glasgow, Scotland who've been around for about two years. Their first single, "Bud," came out last year and with their clear voices, strong melodies and twangy, reverby sound, comparisons to Best Coast followed. While they don't sound exactly like Bethany Cosatino's band, it's not that far off either. (Rilo Kiley is another common comparison.) The band's new single "Killer Bangs" came out this week via FatCat who will be releasing their debut album on July 15. (Pre-orders are available.) That record was actually made in America, with Peter Katis (The National, Interpol) at his Tarquin Studios in Connecticut last November. Stream a couple tracks below.

The duo just played The Great Escape Festival in Brighton, England last weekend and just started a UK tour with Courtney Barnett (who will be here for Northside). Honeyblood will be over for a few North American shows too. Here in NYC, they've been added to Teenage Fanclub's show at Hudson River Rocks on July 24. Saint Rich have also been added to that outdoor show, which is free and open to the public.

All Honeyblood tour dates are listed, along with streams and videos, below...