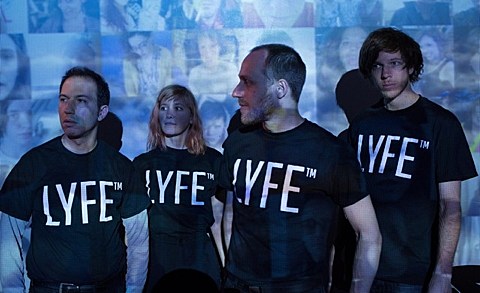 Glass Ghost, whose lineup includes vocalist/producer Eliot Krimsky (also of Here We Go Magic and founder/drummer Mike Johnson (also of Dirty Projectors), are set to release a new album, LYFE, on September 16 via Western Vinyl. The album features contributions from Brian Betancourt of Hospitality, Joan Wasser of Joan As Police Woman, Dirty Projectors' Nat Baldwin, and ex-TEEN member Jane Herships. We've got the premiere of a new single from the album, "Sound of Money," which is a nice dose of arty pop that should appeal to fans of the other projects these guys are in. You can stream that, with the LP tracklist, below.

Centering around the music of the band Glass Ghost, the visual component of this show is based on audience data, which is mined by LYFE™, a fictional company that identifies, analyzes, and advertises users emotions. Pre-show, participants take the MyLyfe™ survey, which asks them for a selfie, their online behavior, and drawings of a better future. During the show, as the music of Glass Ghost plays, audience members witness themselves and their data on the a screen--watched, quantified, and advertised, and then digitally disrupted as the LYFE™ software acquires an error and all data is erased and forgotten. The audience is then given a chance see their authentic selves laid out in front of them. LYFE™ is a music-video concert and audience participatory work in progress set for its world premiere in April 2015.