photo: Glasser at MHOW in 2013 (more by Amanda Hatfield) 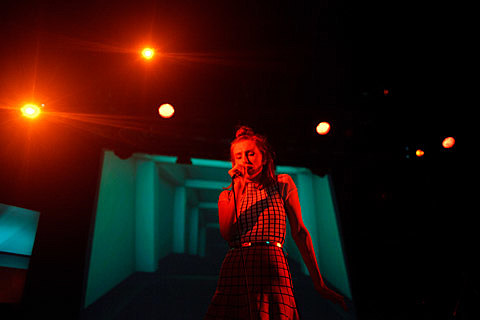 Glasser has announced an upcoming performance called Charge, which will take place at The Kitchen on October 23-24. Charge is a collaboration with local artist Jonathan Turner and will feature "vocal and movement performances" by Glasser which will be accompanied by visuals from Turner. Here's how The Kitchen describes Charge:

Through a program of vocal and movement performances by Glasser and accompanying visuals by Turner, the audience will experience the body as a show. Performer and audience will be enveloped in a sensory macro-environment. Visuals will be abstract yet microscopically tactile. Sounds will feel spatially personal, as if Cameron is whispering directly in your ear. The effect will be performance as an intimate yet exotic embrace.

Tickets for the performances are on sale now.

Glasser and Turner have collaborated before, the artist having worked closely on the design and music videos for Glasser's 2013 album Interiors.

You can see the music video for Glasser's "Shape," directed by Jonathan Turner, below.