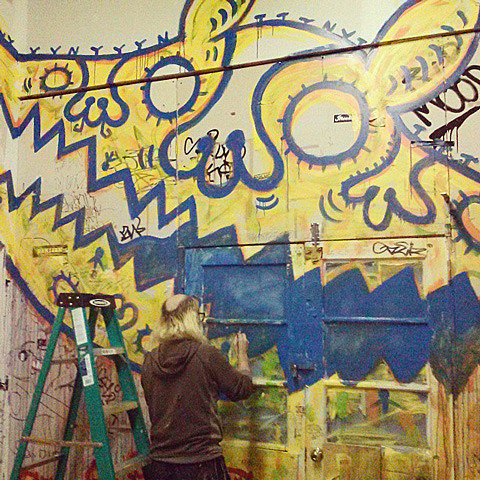 Williamsburg venue Glasslands only has eight more nights left in business. In its early Glasslands Gallery days, the place had a lot of art-related events and, in that spirit, has added a bunch of new pieces for it's final days, all curated by Collective Craft. They include a mini-cloud above the soundboard, a plexiglass chandelier above the bar, an "Infinity mirror" created by Anamanaguchi bassist James Devito, the support beam in the middle of the room has been turned into a tree, and there are illuminated screens in the bathrooms. If you happen to look up while in the bathrooms, you'll notice an illustrated history of Glasslands' bathrooms. More art is being added daily.

While the art is only viewable during normal business hours, tonight (12/22) might be a good night to check it out as its Glasslands' free holiday party with Cerulean, Klaus, Sharif Mekawy Group, DJ Jonathan Toubin, and there will be karaoke too. This will also be the general public's only chance to peek backstage and see Peelander Yellow's new mural he painted back there. Doors are at 7 PM tonight.

Tickets are still available to all of Glasslands remaining shows (including TR/ST on 12/29 and Cymbals Eat Guitars on 12/30) except the NYE closing night extravaganza which is sold out.

A rundown of Glasslands' art installations, along with a few images, below... 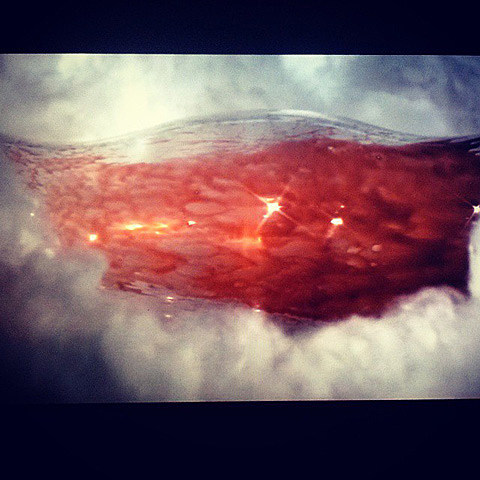 "Bathroom Screens"
by Grant Guilliams​. Raised in the North Dallas suburb of Plano, Texas​, Guilliams​ received his MFA from the Mount Royal School of Art at the Maryland Institute, College of Art in 2007. He lives and works in Brooklyn.
The restrooms at Glasslands are iconic in my memory for their state of disarray. Video and sound pieces installed in these restrooms are suggestive of what has been evacuated in the space, but beautified with an aesthetic more commonly associated with food and cosmetic advertising, ​employing the same visual language used to sell a delicious beer or hot fudge sundae.

"untitled 1" "untitled 2"
​by ​Kelly Knapp​.​ ​A m​​ulti​-​disciplinary artist, architect, and designer specializing in art direction, events, visuals, and brand​, ​​Knapp graduated from the Rhode Island School of Design with her Masters in Landscape Architecture and has subsequently worked in the field of architecture ​and display.
The pieces for Glasslands are about line, form, shape, layering, reflection, mapping, and interlock. They were originally designed in AutoCAD and made with the simple but well used and well-loved model making material of every architect 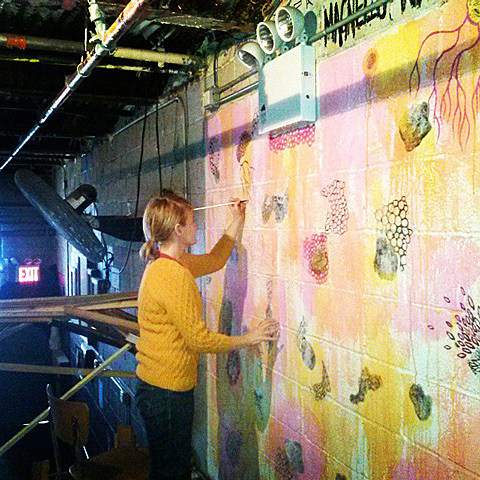 "Mezzanine Mural"
by ​Ashley Blanton​. Entangled in a compulsive need to create​, ​​Blanton's desire to find magic in the mundane is perhaps the impetus behind her quiet, thoughtful attention to detail.
Created on the mezzanine wall of Glasslands Gallery, Ashley Blanton's mixed media ​installation piece incorporates elements of painting and collage. Biomorphic forms and broken bones appear to tumble through a two-dimensional space, held in place on the threshold of either breaking apart or bursting forth into being. The piece is ephemeral in the sense that after Glasslands closes its doors, the wall will be torn down, painted over, or destroyed.

"The Spaces Between"
​by ​Caitlin McCauley​. ​A Brooklyn based art therapist and sculptural artist​, ​​McCauley's work is often reactionary and a product of self-care inspired by those she works with therapeutically; she finds herself most contained by repetition and connectivity.
This undulating, simplistic form explores the relationship between connect and disconnect through a sewn paper structure, a continuing interest in her work today in this ultra "connected" world.

"The Cloud"
by Richard Clarkson Studio. Offer​ing​ a range of innovative perspectives on traditional material ideologies, new technologies and adventurous opportunities​, Richard Clarkson Studio​ d​​istort​s​ the ever-blurring lines between art & design, ​using ​processes and methodologies drawn from both disciplines.
​The Cloud is an interactive lamp and speaker system, designed to mimic a thundercloud in both appearance and entertainment. Using motion sensors the cloud detects a user's presence and creates a unique lightning and thunder show dictated by their movement. Using color-changing lights the cloud is able to adapt to the desired lighting color and brightness. The cloud also has alternative modes such as a nightlight and music reactive mode.

"Dark Chandelier No. 1"
​by Zachary Clausen​. Raised in the Pacific Northwest Territory, Clausen was the family audio-visual cassette engineer and director of shoe box set design for his Teenage Mutant Ninja Turtle action figures. In 2009 he left Seattle for Brooklyn and Pabst Blue Ribbon purchased his 2D pasta art. Since then various venues where Zach has performed on 80's synthesizers and drum machines have commissioned him for instillations, murals or to paint over his friend's graffiti.
This piece is a tiered triangle of plexi-glass. The various colors and length strips are arranged to refract light existing in the space as well as situational lighting brought in by performers

"Voids​"
​by James Devito. Devito is the bassist and lighting designer of Anamanaguchi.
An infinity mirror light design installation.

More installations are being added every day.